Pitting communities against each other won't work in the Ring of Fire: Horwath 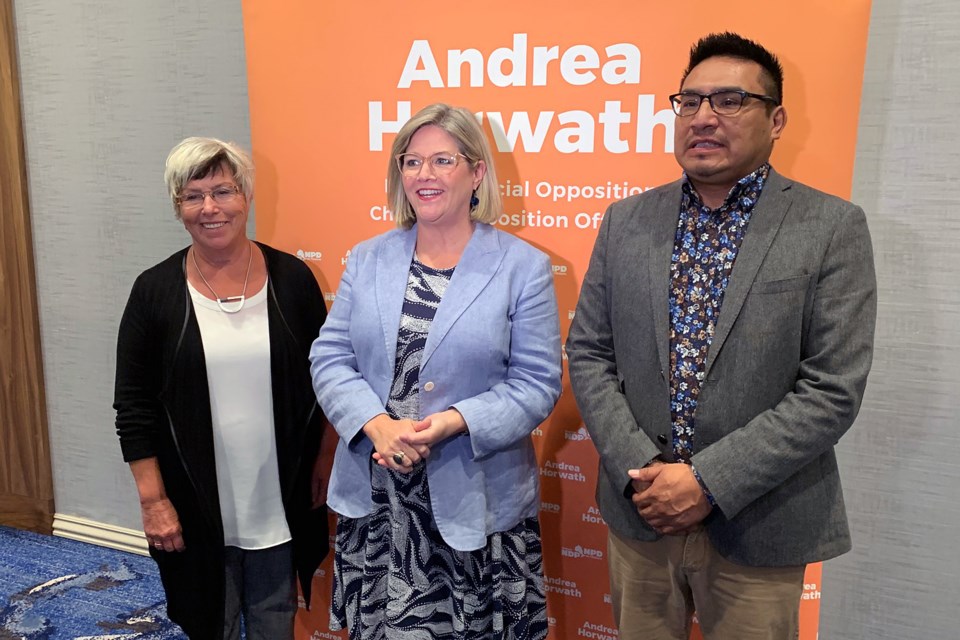 Earlier this week Greg Rickford, the mines minister, said the province would end a framework agreement signed five years ago with nine Matawa First Nations communities, and instead work with communities “willing to work at the speed of business.”

Horwath said Ontario has a responsibility and an obligation to consult with First Nations communities about the potentially multi-billion dollar mineral extraction project in the province’s far north.

“It’s a duty and you can’t simply get on a bulldozer and drive on into the Ring of Fire and create a chaotic situation. It’s just not the way things are supposed to happen and I’m very, very troubled that this government doesn’t seem to understand its treaty obligations and duties and doesn’t seem to respect its obligation of engaging First Nations communities,” Horwath said on Thursday, wrapping up three days of NDP caucus meetings in Thunder Bay.

“The last thing I want to see is a government that pits one community against another, that creates a divide-and-conquer kind of scenario. That’s the last thing we need.”

Horwath, who has served as NDP leader since 2009, was grilled on her party’s approach to the Ring of Fire during a half-an-hour question-and-answer session with local community leaders.

“From the get-go (Ford) has said he’s going to take his bulldozers and come into our territories and communities,” Kastern said, adding that the province singled out they wanted to work with willing communities sends the wrong message.

“It was pretty much a slap in the face to First Nations communities,” she said.

Horwath promised she’d listen to what Indigenous community leaders, though offered up little in terms of substance on how she would tweak the previous agreement, put in place by the former Liberal government.

“It’s even that much more galling, because real work had been done. It wasn’t perfect, everyone knows it wasn’t perfect. But let’s work to fix what’s broken and build on it, not simply tear things up to make way for a bulldozer."

Horwath took questions on a variety of topics, including one from Evergreen: A United Neighbourhood’s Linda Bruins, who on Wednesday made a plea for funding to keep the doors of her organization, a victim of Conservative funding cuts, open.

Bruins wanted to know how an NDP government would help organizations like hers stay afloat.

Horwath said she believed strongly in grassroots programs like Evergreen, that she believes work to prevent problems in the community.

Cuts like Ford’s have negative dividends across Ontario, she added.

“We’re trying to build strong, resilient people and communities that have hope for the future ... These kind of cutbacks, the repercussions are enormous, not only financially, but in terms of the human costs as well,” Horwath said.

The NDP leader also said they would take a different path when it comes to post-secondary education in the province, responding to a question from Lakehead University Student Union vice-president Farhan Yousef.

Horwath also said privatization of the health-care industry is not a path the province should walk down.

Seven alleged drug traffickers to remain in custody awaiting bail
May 25, 2020 6:14 PM
Comments
We welcome your feedback and encourage you to share your thoughts. We ask that you be respectful of others and their points of view, refrain from personal attacks and stay on topic. To learn about our commenting policies and how we moderate, please read our Community Guidelines.
The latest on COVID-19 Local and global updates →
Support local: Delivery, takeout & more
View local businesses