Police Services Board could regain voting power by February: Administrator

Members of the Thunder Bay Police Services Board must undertake training before voting power is returned; all decisions are currently being made by an administrator in consultation with the board.
Dec 18, 2018 12:31 PM By: Doug Diaczuk 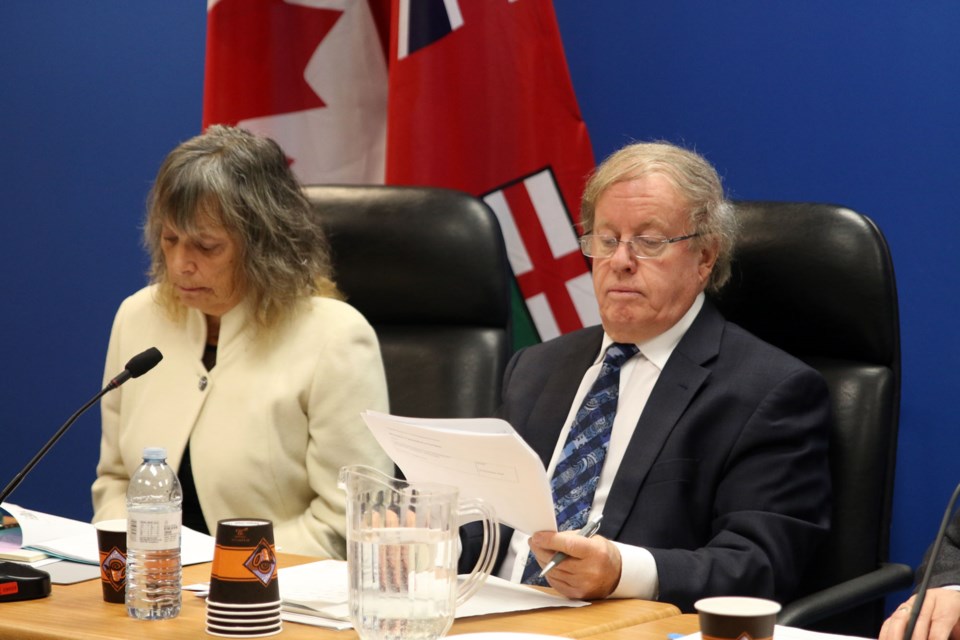 THUNDER BAY - The administrator who has temporarily taken over the duties of the Thunder Bay Police Services Board anticipates voting power will return to the board members as early as February next year after the completion of a comprehensive training course.

“I want to hand the reigns over to Celina (Reitberger) as soon as I can,” said Thomas Lockwood, who has been appointed the administrator of the Police Services Board.

The report came on the heels of Gerry McNeilly’s findings of systemic racism at an institutional level in the Thunder Bay Police Service.

Sinclair recommended an administrator temporarily take over the voting duties of the Police Services Board and on Tuesday, the first meeting was held with Lockwood at the helm.

Reading from a statement before the start of the meeting, Lockwood said the board acknowledges “unequivocally that systemic racism exists both in the Service and the Board” and that the board has “failed the Indigenous community.”

But Lockwood called this a turning point and while a trust with the community has been broken and will take time to repair, there is a commitment to move forward.

A major component of moving forward will include extensive training regarding cultural awareness with respect to the Indigenous community, as well as policies, and communications.

The training is expected to take three days and will take place in February. Currently, there are two vacancies on the board, but Lockwood said the training will commence if those two spots are filled or not.

What will be known as the ‘Thunder Bay Training Course,’ Lockwood believes it can set the example for other police service boards across the province and cast the Thunder Bay Police Services Board in a new light.

“I’m really looking forward to it,” Reitberger said. “I’ve been at this for a year but I still have a lot to learn. I’m excited Thunder Bay will be leading the way. We are really going to be pioneers in this much needed training.”

Lockwood added that he would like to see other changes to how the Police Board operates, including moving the meeting location outside of the Thunder Bay Police Service Balmoral Station, as members of the public reported feeling uncomfortable attending meetings at the station.

He would also like to see more people in the public getting involved, attending meetings, and he would like to look into the possibility of hosting a webcast of all Police Service Board meetings.

“We want people to come here, sit in the audience,” he said. “We may even start having audience participation. We are trying to get up the comfort level of people coming to our meetings.”

Last week, the Thunder Bay Police Association issued a response to the findings of the OIPRD and OCPC reports, stating that it did not accept the accusations that its members are racist.

Reitberger said she respectively believes the Police Association misinterpreted the findings, which is not calling any one officer or member racist, but rather acknowledging that systemic racism exists in the Thunder Bay Police Service.

“We have a service that we are proud of,” she said. “I think what we need to do is I would like to send a message to the force that we are behind them. We’ve taken a blow, but we are all in this together. The more we can collaborate and cooperate, the faster and easier it’s going to be to move forward.”

Lockwood added that the Police Association’s comments would have no impact at all on the board or how it moves forward.

Next month, the Thunder Bay Police Service Board will participate in a community circle to publically acknowledge and apologize for failing the Indigenous community.

Reitberger said it will be a crucial step in starting the journey of reestablishing trust with Indigenous people.

“That’s going to be the first thing we do in public and I think everyone is waiting to see how that is going to play out,” she said. “We want to do it respectfully, we want to invite the community, including the Indigenous community, we will have elders there, ceremony, and I think it is something people are going to appreciate. Just saying it into a microphone at this point in time is not really powerful enough. We feel we need a powerful method.”

When asked if she believes the Indigenous community will accept the acknowledgement and apology, Reitberger said she does.

“We are all about forgiveness,” she said.

Thunder Bay Police Service chief, Sylvie Hauth, said in a statement issued before the Police Board meeting that she will be consulting with senior administration and members of the Police Service in early January regarding the 44 recommendations in the OIPRD report to formulate an action plan.

Superior North EMS 'blown away' by demand for children's COVID-19 testing (2 Photos)
Sep 23, 2020 1:46 PM
Comments
We welcome your feedback and encourage you to share your thoughts. We ask that you be respectful of others and their points of view, refrain from personal attacks and stay on topic. To learn about our commenting policies and how we moderate, please read our Community Guidelines.
The latest on COVID-19 Local and global updates →