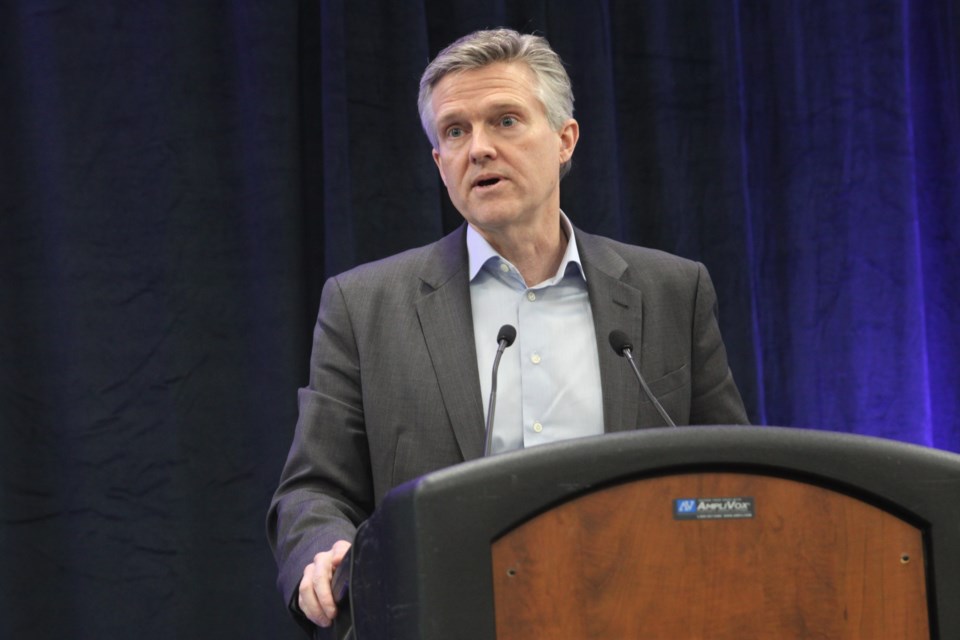 THUNDER BAY – The Ford government's plan to overhaul the Endangered Species Act is welcome news for regional municipal leaders who have previously expressed concern about its potential impact on the forestry industry.

The Progressive Conservative provincial government last week announced that it would be proposing changes to the legislation following a review process conducted during the winter.

Rod Phillips, the minister of environment, conservation and parks, emphasized the importance of achieving a balance to create an efficient framework.

“We’re looking at the ways we can continue to protect species. It’s very important we do that but also do that in a balance with local economies,” Phillips said in a Wednesday morning media availability in Thunder Bay after making brief remarks at the Northwestern Ontario Municipal Association conference.

“Forestry is just one of the examples of that where we believe we can strike a better balance that protects important species at risk and their habitats but also make sure that we can support the economic interests of local communities.”

The forestry industry has been temporarily exempted from the Endangered Species Act, instead being regulated by the Crown Forest Sustainability Act. Concerns have been raised by regional leaders and forestry industry stakeholders that the Endangered Species Act regulations could threaten wood supply if forests would be off limits to protect caribou habitats.

The most recent exemption was set to expire last year but a two-year extension was granted by the former Liberal government in the final months of its term.

“I’ve been very pleased with the engagement from the forestry sector, from other sectors,” Phillips said. “I think they’re seeing this is a government that’s constructive, wants to make sure we open up areas so that we can have a vibrant forest industry and we can protect species like caribou and others that need to be considered.”

A potential change to the Endangered Species Act is to allow developers, municipalities and industry with the option to pay a fee in place of other requirements that had been in place.

Atikokan mayor Dennis Brown, who has lobbied against the Endangered Species Act being imposed on the forestry industry and warned it could threaten the viability of Northwestern Ontario mills, said he’s pleased the government is looking at changes.

“It’s very important for our forestry industry,” Brown said. “That’s very crucial up here in Northwestern Ontario, Atikokan especially and right across Ontario. I think there’s a way of looking after our climate, our animals and also providing jobs and helping the economy of Ontario.”

Changes to the act could clearly set the long-term framework for industry rather than continuing to receive a series of short-term extensions, which Brown said is important for stakeholders.

“They need to have certainty in order to market their products and to harvest their products,” Brown said. “If there isn’t certainty, there’s no guarantee the industry is going to keep going on. I think this is very important and I think the government says they’re open for business and that will help the industry.”

COVID-19 Situation Report for June 1st, 2020
Jun 1, 2020 6:32 PM
Comments
We welcome your feedback and encourage you to share your thoughts. We ask that you be respectful of others and their points of view, refrain from personal attacks and stay on topic. To learn about our commenting policies and how we moderate, please read our Community Guidelines.
The latest on COVID-19 Local and global updates →
Support local: Delivery, takeout & more
View local businesses