Activists from a Facebook-born movement against the prorogation of Parliament will take their fight to the streets next weekend.
0
Jan 16, 2010 4:03 PM By: Jeff Labine 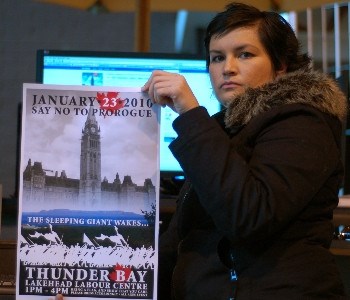 Joyce Hunter holds one of the information posters at Lakehead University on Saturday. (By Jeff Labine, tbnewswatch)

Activists from a Facebook-born movement against the prorogation of Parliament will take their fight to the streets next weekend.

Members of the Canadians Against Proroguing Parliament Thunder Bay Chapter were handing out information fliers across town this Saturday. The leaflets call for an open debate on the positive and negative qualities of prorogation. The debate, or rally, is scheduled to take place at the Lakehead Labour Centre on Saturday, Jan. 23 from 1 to 4 p.m.

Joyce Hunter, spokeswoman for CAPP Thunder Bay, said the message she gets from prorogation is that Prime Minister Stephen Harper does whatever he wants.

"They have no interest in having a conversation with average Canadians," Hunter said.

Parliament faced numerous issues before it closed for the holidays. Opposition raised concerns on the treatment of Afghanistan detainees, senate reform and crime legislation. Critics accused Harper for using prorogation as a way to dodge some of these issues.

"There are 37 bills that are before Parliament right now that will be expunged as a result of prorogation. They are going to be taken off the table. However, we heard that some of the bills will be revived (when Parliament resumes in March)," she said.

Hunter said she is a member of a First Nations community and said she sees a lot of hardships on the reserves. More than 1,000 First Nations people are homeless because of a diesel spill and a massive sewage back up in Attawapiskat, she said. It was this reason why she decided to get involved with CAPP.

Hunter doesn’t watch the political news all the time, but remembers an interview Harper did with a national broadcaster. Harper said people care more about the Winter Olympic games than Parliament, which Hunter says concerns her.

"The idea that we as Canadians are paying for his box seats at the Olympics while these people freeze just doesn’t sit well with me," she said.

Harper announced the prorogation of Parliament on Dec. 30. This was the second time that Harper suspended Parliament, the first time being after the 2008 fall election to stop a possible coalition between the Liberal, NDP and Bloc Quebecois federal parties.

The Thunder Bay chapter of the CAPP, as of Monday morning, had 230 members. The Saturday, Jan. 23 rally Facebook page had nearly 70 confirmed guests.

The group’s leaflets are also available at Lakehead University’s Agora Café and the Farmers’ Market.