Brian Hamilton says he has no regrets about dousing a group of Calgary-based anti-abortion protestors with chocolate milk.
Jun 18, 2012 2:30 PM By: Leith Dunick 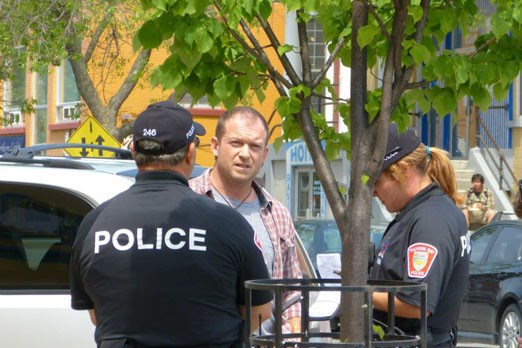 A suspect faces four counts of assault after allegedly pouring chocolate milk over anti-abortion demonstrators Saturday near the Bay and Algoma area of Thunder Bay. (Facebook)

Brian Hamilton says he has no regrets about dousing a group of Calgary-based anti-abortion protestors with chocolate milk.

Hamilton, owner of Algoma Street’s The Red Earth and the Bean Fiend, and the president of the Bay and Algoma Merchants Association, is facing four counts of assault, after four members of the New Abortion Caravan set up shop in the middle of a long-planned sidewalk sale.

The well-known Thunder Bay businessman said he was first irked when a truck bearing graphic images of aborted fetuses slowly drove through the neighbourhood, in full view of his customers and several young children.

He said he tossed eggs and whipped cream at the trucks and told them to leave, only to have them park and line the sidewalk at the corner of Bay and Algoma for a peaceful, and he later found out, legal protest.

“I approached them, as many people did, as hotly an issue as this was, and asked them to leave. Of course they didn’t. They claimed they were on city property and they had a right to be there,” said Hamilton, who plans to petition city council in the near future to ask for a basic decency bylaw banning obscene materials from being displayed in public.

Hamilton said his actions were out of frustration, nothing more, nothing less. By no means were they political.

“I want people to know. I didn’t do this to protest anti-abortion sentiment. I am not wading into that issue. The issue here is 100 per cent the posting of graphic stuff.

Police were already on scene, after Hamilton said he called to complain about the graphic nature of the protestors’ signs, and immediately took him into custody.

The 36-year-old spent the day in jail and will be back in court on July 18 to answer the assault charges.

A request for comment from a representative of the New Abortion Caravan, sponsored by the Canadian Centre for Bio-ethical Reform, was not immediately returned. However, in an email released to local media, a spokeswoman said they took the incident in stride.

"We are disturbed that this man would bully and assault young women trying to speak up for other women as well as children.  But we are inspired by the calm response of our team members who refuse to fight violence with violence.  By their actions, my courageous colleagues echoed the sentiment of Dr. Martin Luther King, Jr. who once said, 'We will match your ability to inflict suffering with our ability to endure suffering.'"

The group also posted pictures of the assault and its aftermath, as well as a video of the incident to Facebook and You Tube.
Hamilton said it’s a clear sign the group was there to incite reaction and violence to draw attention to their cause.

“Some of the business owners in the area were a little concerned with regards to the nature of the material that was being circulated and the images that were being shown,” Tilbury said.

“The incident did get a little heated up where one male did go up to the demonstrators and poured chocolate milk on them. He was subsequently arrested.”

“Anytime there’s an unwanted, intentional act on an individual that is considered to be an assault.”

The suspect was charged and released pending a July court date.