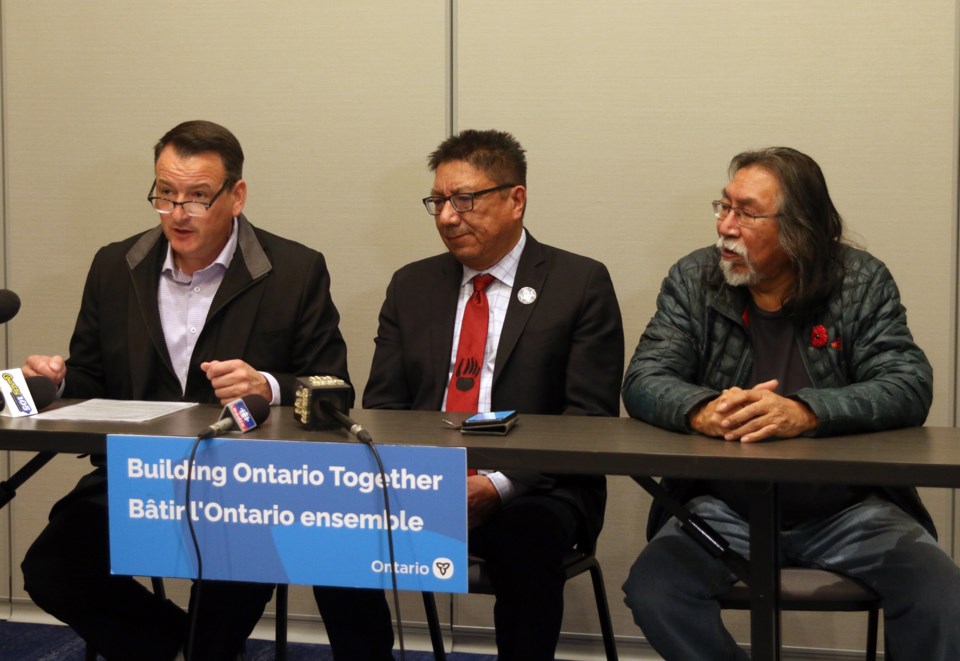 THUNDER BAY - Several remote First Nation communities will be moving closer to prosperity and economic development opportunities with the help of more than $500,000 in provincial funding.

“They need to have a solid starting point to begin their economic development planning, which is why today’s announcement is so significant for these communities,” said Nishnawbe Aski Nation Grand Chief, Alvin Fiddler.

Minister of Indigenous Affairs, Greg Rickford, was in Thunder Bay on Wednesday for the Nishnawbe Aski Nation Annual Chiefs Fall Assembly, where he announced $540,000 in funding through the province’s Indigenous Economic Development Fund that will be used to support economic development in six NAN communities.

“This is $500,000 in six NAN communities but this is only starting here,” Rickford said. “This is not about the money. This is about what we are targeting and trying to achieve.”

Rickford said the funding is about ensuring these communities in the NAN territory are given a chance to participate in economic opportunities in the province.

“To move toward prosperity for all of Ontario and to work together and to build this together and in resetting these relationships, building relationships that matter and can change the fortunes of not just the entire community, but the Nishnawbe Aski Nation territory,” he said.

The six projects include:

Fiddler said NAN members have spoken out about the need to keep economic development front and centre as a way of building new paths forward toward sustainability and creating an economic base in their communities.

“I welcome these announcements,” he said. “We need, as much as we can, to support our communities doing this work, especially when we have big projects like Watay Power.”

According to Fiddler, funding for economic development in remote First Nation communities is nearly non-existent, and he called the announcement on Wednesday significant.

“We recognize that the reality is, as we get older and think of roads, the younger generations think of highways and information highways,” Rickford said. “These reflect the priorities and where the puck is headed and where we ought to be.”

Rickford added that he has met with the board of the Northern Ontario Heritage Fund and he would like to see it reach more communities across Northern Ontario, particularly First Nations.

“Northwestern Ontario simply has not had the kind of access to the resources that that fund is supposed to serve all of Northern Ontario,” he said. “We are working on a plan and we will begin a more formal engagement in the next month or two to ensure that more and more Indigenous communities have access to that, including opportunities like the kind of projects we are including today.”