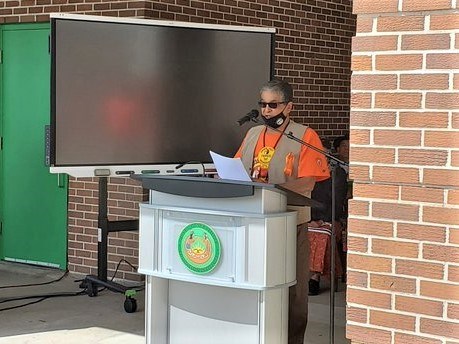 The Ontario government has outlined a commitment to support Indigenous communities in investigating, protecting, and commemorating burial sites at former residential schools.

The announcement of $10 million over three years for a plan endorsed by groups including Chiefs of Ontario and Nishnawbe Aski Nation was made by Minister of Indigenous Affairs Greg Rickford in Kenora on Tuesday.

It follows the discovery of the bodies of 215 children at an unmarked grave site on the grounds of the former Kamloops Indian Residential School.

The government said there were 18 Indian Residential Schools in Ontario, citing the Truth and Reconciliation Commission, with the last of those closing in 1991. Some sites have since been repurposed, abandoned or destroyed, the government said.

Ogichidaa Francis Kavanaugh of Grand Council Treaty #3 said there was no doubt similar sites would be found in residential schools across the country, as suggested in the TRC's final report, released in 2015.

The process was a difficult but necessary one, he said.

“After the news of the 215 children found in Kamloops, our nation is heartbroken,” he said. “This news has affected our people in deeply profound ways. While we already knew this occurred in Canada, it’s incredibly painful to relive, especially for survivors and our families.”

“Truth be told, it has impacted every First Nation member throughout this land we call Canada.”

He acknowledged Tuesday's announcement as a major step by the province to move forward alongside Indigenous communities.

Rickford said the investigations could expand beyond the grounds of the residential schools.

“Much of this information is within the knowledge of survivors and Indigenous leaders,” he said. “As you heard Ogichidaa Kavanaugh allude to, it may be true that there are unmarked graves, and that they may not be immediately proximal to the known 18 Indian Residential Schools, as they were called at the time.”

Some of the funding announced will support mental health services for residential school survivors and their families and communities, the government said.

It's crucial the process is driven by Indigenous communities and survivors, and minimizes re-traumatization, Rickford said Tuesday, a message echoed by Indigenous leaders who spoke in person and virtually at the announcement, along with Premier Doug Ford.

“What we’ve announced here today is focused on providing support to an Indigenous-led decision-making process," Rickford said. “Work of this nature is specialized and technical. We’ll be working in partnership with survivors, elders, leaders, and communities.

"Our government will ensure the technical experts such as archaeologists, forensic specialists, and historians are available to support communities. We anticipate many will want this process to move as quickly as possible, however, we must also ensure the process is respectful and thorough.”

Chief Mark Hill of the Six Nations of the Grand River, joining virtually from the Mohawk Institute Residential School, said the province's commitment to fully investigate all of the sites was crucial, saying there was evidence major crimes had been committed.

Six Nations had called on the OPP and chief coroner to pursue potential criminal investigations, he said.

“Deaths have been reported and there are reasonable grounds for these investigations," he said. “The National Centre for Truth and Reconciliation has documented evidence of 52 children who died here, but we don’t know how many others are out there, or most importantly, where they are buried."

“To this very day, at Six Nations, there are whispers within our community about our missing children and where they might have been buried. It is past time that we find them and bring justice.”

Ford suggested the province would support First Nations in launching investigations where appropriate.

“The atrocities, the tragedy that’s happened in the past, we have to investigate it,” he said. “We’re going to make sure we go to the full extent and make sure [Indigenous communities] have the support they need.”

Provincial and Indigenous leaders criticized the Catholic Church for not stepping forward to more fully address its role in operating residential schools and work with survivors.

“I absolutely think they should become an integral part of this process," said Rickford in response to a question from Randy Rath of CHCH.

“I believe the Catholic Church needs to come forward and make efforts to bring the pope to Canada for a formal apology," added Kavanaugh.

For former students and others impacted by residential schools, a National Indian Residential School Crisis Line is available 24 hours a day at 1-866-925-4419.