Former Member of Parliament says rising hydro costs convinced him to come out of retirement and seek a seat at Queen's Park.
Jun 12, 2017 8:43 PM By: Leith Dunick 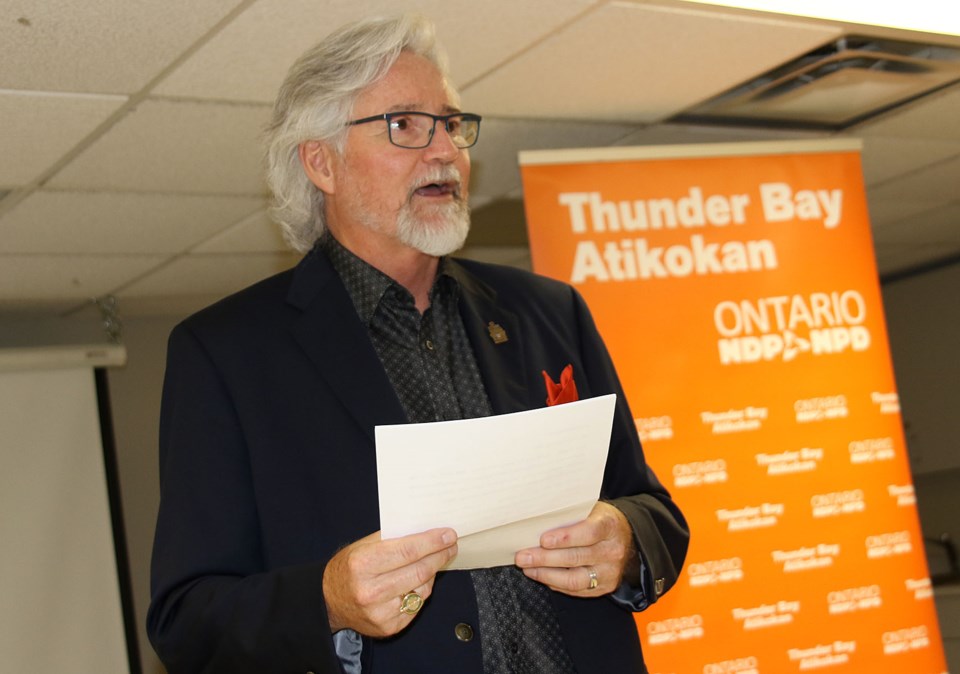 It’s time for new blood at Queen’s Park, said the 63-year-old former NDP Member of Parliament, who on Monday officially accepted the nomination to run for the party provincially in the riding of Thunder Bay-Atikokan.

Rafferty, who was acclaimed, is hoping the fourth time is a charm.

Before his seven-year stint in Ottawa, Rafferty twice sought the seat, losing most recently in 2007 by just 46 votes to incumbent Liberal Bill Mauro, who holds the riding to this day.

“There was certainly a pattern emerging in the past couple of years about a real dislike of Kathleen Wynne and what her Liberals are doing to this province,” Rafferty said, explaining his decision to end his political retirement and hit the campaign trail for the ninth time as a candidate.

“Their concerns are the same concerns that I have. I was urged by a fairly large number of constituents that I should throw my hat in the ring and we should do our bit in Thunder Bay-Atikokan, at least, to ensure Kathleen Wynne’s Liberals are out.”

Rafferty’s political past isn’t without controversy.

The former radio broadcaster in 2011 was disciplined by incoming NDP Leader Thomas Mulcair for voting in favour of abolishing the controversial long-gun registry, against the wishes of the party leadership.

Both he and fellow Thunder Bay MP Bruce Hyer were not allowed to make statements or ask questions in the House of Commons and both had their critics’ roles taken away.

Rafferty has also only been successful twice at the federal or provincial level as a candidate, winning the Thunder Bay-Rainy River riding in back-to-back elections in 2008 and 2011. He was swept out of office in 2015 by Justin Trudeau and the Liberal’s red tide, losing to current MP Don Rusnak.

Spiraling hydro costs are the reason Rafferty said most propelled him back to the political trail in 2017.

“The fact is, we’re all corporate captives to the hydro system,” Rafferty told a crowd of about 10 that attended the nomination meeting, railing against the privatization of Hydro One and warning of huge rate hikes expected post-election when consumers have to pay for the 25 per cent cut Wynne has promised rate-payers.

“The Bay Street investors make billions and of course we are taken to the cleaners.”

The Conservatives under Patrick Brown will do no better, he added.

“Their plan is to privatize our hydro system even faster than the Liberals,” Rafferty said.

The Liberals, Conservatives, Green Party and Northern Ontario Party have yet to name candidates iin Thunder Bay-Atikokan. The election is scheduled for June 2018.