Professor and activist, Gary Kinsman, held a talk at Lakehead University about the historical connection between the LGBT movement and Indigenous people and why it should be strengthened again today
Jan 26, 2019 5:09 PM By: Doug Diaczuk 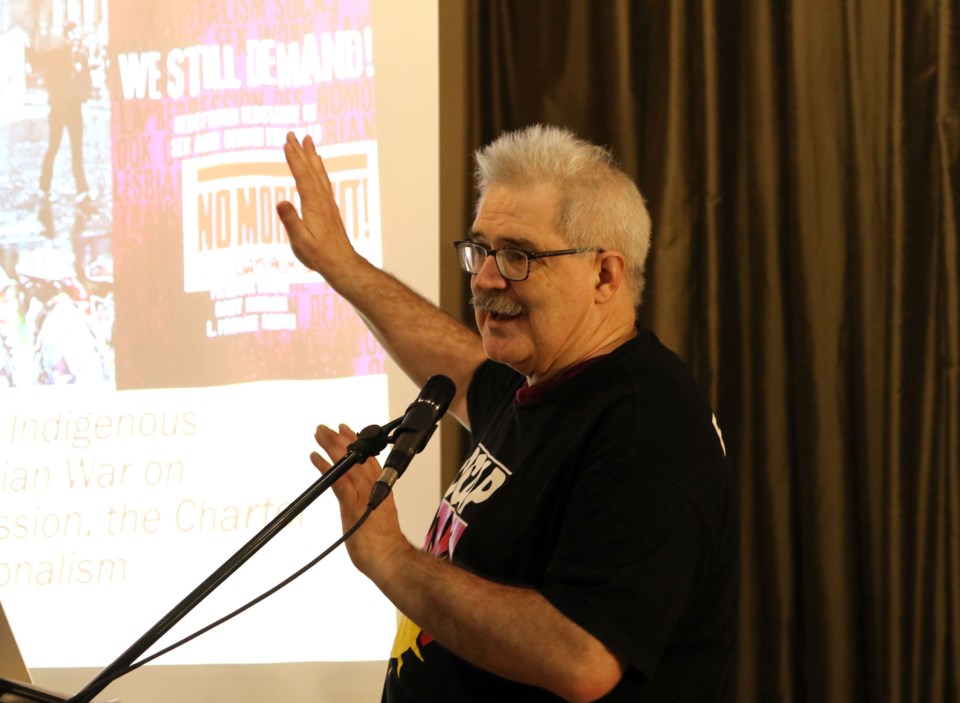 THUNDER BAY - Historically, the LGBT community and Indigenous people have been closely connected in their struggle for equal and fair treatment in Canada. However, that connection has been partially forgotten and a former professor and activist said its time to realign both movements in order to move forward.

“There are these major historical connections and I want to bring them back into people’s view because I think people have tended to forget them,” said Gary Kinsman, a professor emeritus at Laurentian University and long time social justice, gay liberation, anti-capitalist activist.

Kinsman gave a talk at Lakehead University last week where he outlined some of the past interrelationships between LGBT and Indigenous struggles.

According to Kinsman, the connection between the two movements was closer in the 1960s in terms of policing, charter operations, and government initiatives.

"It’s really interesting that in 1969 when the Canadian government was supposedly legalizing or decriminalizing homosexuality, which it did not do, was the same time as the White Paper, when they were trying to extinguish Indigenous sovereignty," Kinsman said.

“It’s really interesting right now that at the same time the Canadian government and Justin Trudeau have given an apology to the LGBT communities for historical injustices done to our communities, that they are once again moving to marginalize and minimize Indigenous sovereignty.”

With these historical connections being lost, Kinsman said it has resulted in what he calls a form of settler homo-nationalism within LGBT communities.

“A sort of attitude that Canada is a better country than other countries on LGBT rights and therefore a certain marginalization or lack of concern for the Indigenous struggle,” he said.

When the Gay Liberation Front first began pushing for social change, it was allied with several other oppressed and marginalized groups in North America, such as the Black Panthers and the American Indian Movement.

But the LGBT movement has become more institutionalized, Kinsman said, and more focused on narrower notions of rights.

“Just let us in to what currently exists in society, which has satisfied some white middle class gay men in particular, but it’s actually left behind large sections of the LGBT community including people of colour, homeless and poor people, lots of trans people, Indigenous people, two spirit people, who have basically been left behind and left out of that rights revolution,” Kinsman added.

Recently, Pride Toronto voted to ban Toronto Police from participating in the annual Pride Parade. While the decision came down to only two votes, Kinsman said the decision shows a possible realignment of the LGBT community as it stands as an ally with other social justice movements.

“I think that shows a reinvigoration within LGBT communities following Idle No More, Black Lives Matter that understands these connections and these roots and to bring everybody together and not to leave people behind in terms of those of us who are trying to gain rights,” he said.

Kinsman added that his talk is particularly important for the city of Thunder Bay and the issues it has surrounding racism, including systemic racism in the local police service.

“It’s really important for white and settler LGBT people to come out and support Indigenous people against this type of racism,” he said.