Ontario's Ministry of Natural Resources responded to the fire near Red Lake with waterbombers, and warns fire risk remains high across much of the region
Aug 8, 2020 6:28 PM By: TbNewsWatch.com Staff 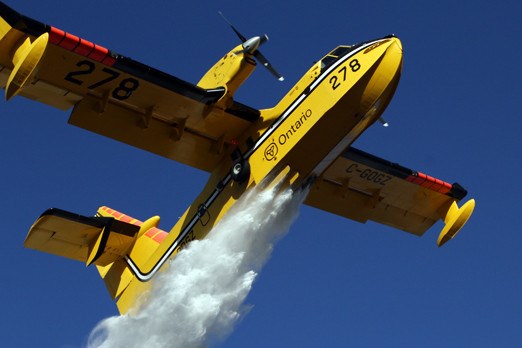 A Ministry of Natural Resources waterbomber dumps a load of water on a fire in this Tbnewswatch file photograph. (File)

RED LAKE, Ont. – A forest fire near Red Lake drew an air attack from Ministry of Natural Resources (MNR) waterbombers Saturday afternoon. It’s one of eight active fires burning in the northwest, with fire risk considered high across most of the region.

The fire, named Red Lake 47, was not considered under control as of Saturday evening, but remained small at 1.5 hectares. It is located about 27 kilometres west of the community.

The MNR reported one other new fire Saturday, Fort Frances 39, situated near Nym Lake about 19 kilometres southeast of Atikokan. The small 0.1 hectare fire is considered not under control.

Of the eight active fires, three others were considered under control, while the remaining three were being observed.

The MNR listed fire risk as high across most of northwestern Ontario as of Saturday evening, with some pockets of extreme risk.

Residents can learn more and consult the province’s interactive fire map at Ontario.ca/forestfires.