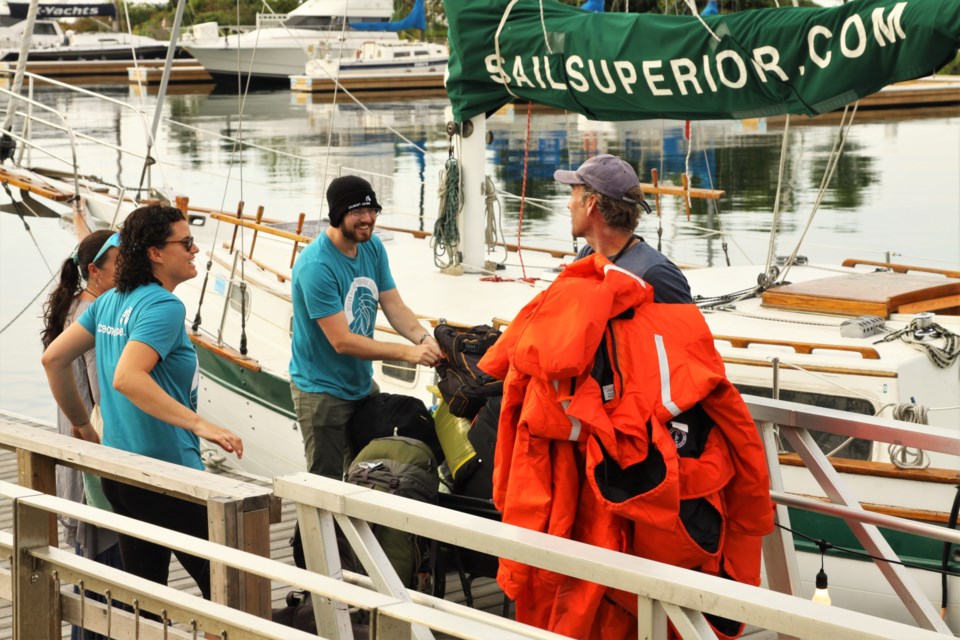 Kelsey Herglotz and Simon Boudreault were preparing to spend two to three months on the island, located east of the Sleeping Giant on Lake Superior, about 40 kilometres from Thunder Bay. They'll spend their days there documenting plant and animal life and weather patterns, supported by a network of local experts.

The two are volunteers with the new OceanBridge Direct Action program, which aims to connect Canadian youth with field-based marine conservation research projects.

Porphyry Island was chosen as one of the inaugural sites for the volunteer service program. Much of the island is taken up by a provincial park, while the rest is occupied by the Porphyry Island Lighthouse, originally built in 1873.

Along with two people caring for the lighthouse over the summer, the pair will be the island’s only occupants, aside from the occasional visitor. Food and other supplies will be dropped off weekly by boat.

Sue Hamel, executive director of EcoSuperior, was at the marina on Sunday morning to see off Herglotz and Boudreault. The local environmental non-profit worked with OceanBridge and Canadian Lighthouses of Lake Superior to design the project.

Relatively little is known about the island’s plant and animal life, Hamel said. She hoped the baseline information established over the summer would help guide future conservation efforts.

“Porphyry Island is a fantastic place, [and] it’s becoming more attractive for visitors,” she said. “The more we know about the island and can track over time, the better we know how to take care of it.”

The pair of researchers has found support from a wide network of local experts. Myles Cummins, from the Claude Garton Herbarium at Lakehead University, had guided them on identifying plants, for example, while climate researcher Graham Saunders mentored them on collecting weather data.

Herglotz, who hails from London and studied international development and geography at the University of Waterloo, said she had jumped at the chance to learn more about marine conservation and travel somewhere new. She was hopeful her stay would unearth new information.

“There could be species people don’t even know are on Porphyry Island, so that area of it is pretty neat,” she said before setting out.

Boudreault was planning some photography and videography that could be used to help promote the island. He relished the opportunity to immerse himself in the landscape, including finding time for a swim or two.

“I’ve heard the water’s pretty cold, so we’ll see how that goes," he said.