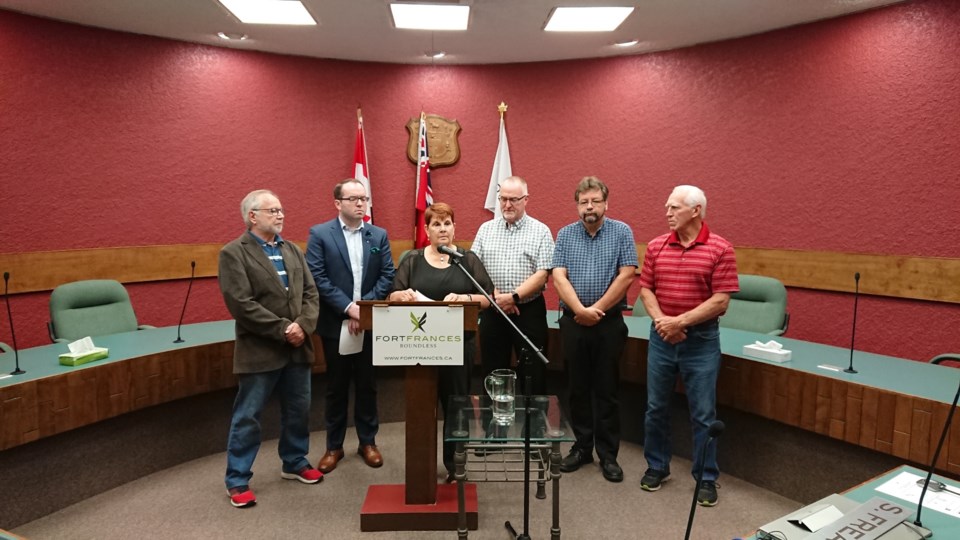 At a news conference in Fort Frances on Tuesday, June Caul said the covenants show that neither Resolute nor the new owner, Riversedge Developments, had any intention of allowing the mill to start up again.

According to town officials, several restrictions were registered on the title of the mill properties on July 9.

"These covenants include restrictions...that prohibit the sale to any entity that would manufacture various types of pulp or paper products, restrictions that require the sale of key mill assets for scrap, and restrictions that prohibit a new owner from engaging the provincial government to request access to a wood supply from the Crossroute Forest," a news release stated.

Noting that Resolute had been saying for years that it was seeking a buyer for the mill, Caul said "we are very disappointed that Resolute would now use the sale of this mill to try to debilitate this asset and hurt a community that has given so much to its bottom line."

She referred to substantial public investments that were made in the mill including "taxpayer money that Resolute has been allowed to walk away with already," describing the outcome as conduct that "should be condemned and penalized by the highest levels of government."

In June 2017, Ontario forgave $23 million in funding it had provided for improvements at the mill, after initially notifying Resolute that it would require repayment if the mill remained closed."

The Ministry of Natural Resources, citing the need to protect confidential commercial and financial information provided by Resolute, refused a recent Freedom of Information request by Tbnewswatch aimed at learning why the Kathleen Wynne government agreed to waive repayment.

Fort Frances officials insist the Crossroute Forest which fed the mill must be accessible to other parties interested in reopening it.

They are demanding the province cancel Resolute's licence for the forest.

According to the town's statement, Resolute sold the mill to Riversedge for one dollar, but company spokesperson Seth Kursman denied that, saying the actual price was about one million dollars.

Kursman said it's normal to include covenants in transactions of this nature.

"When you sell an industrial facility like this, these kinds of conditions are very often the case. In fact, it would be the exception if they were not," he told Tbnewswatch.

"Once again, people are taking information and sensationalizing it, when the conditions are not unlike what you would find in other similar transactions," Kursman said.

Asked specifically why Resolute would prohibit a new owner from seeking wood fibre from the Crossroute, he said "other parties can certainly engage with the province...but what we have said... [is that] Resolute, like others in the industry in northwestern Ontario, is concerned about access to cost-competitive fibre."

Kursman said fibre diverted from Resolute or others "will have a domino impact on other operations."

Kursman was asked why Resolute would require the scrapping of key assets in the Fort Frances mill, but did not respond directly to the question.

"It's how you're reading it...Riversedge is considering a whole range of options for the property. Some of them will include some of the buildings on site today. It is up to them and their partners to decide ultimately what happens."

Kenora-Rainy River MPP Greg Rickford, the Minister of Northern Development, was not immediately available for comment Tuesday, but town officials said he plans to meet this week with Resolute officials "to discuss their continued interests in the crown forests of this district."