A biology professor at Lakehead University has been awarded $150,000 in grants to study freshwater ecosystem recovery strategies at the Experimental Lakes Area and walleye populations on Lake Superior.
Jun 13, 2018 12:43 PM By: Doug Diaczuk 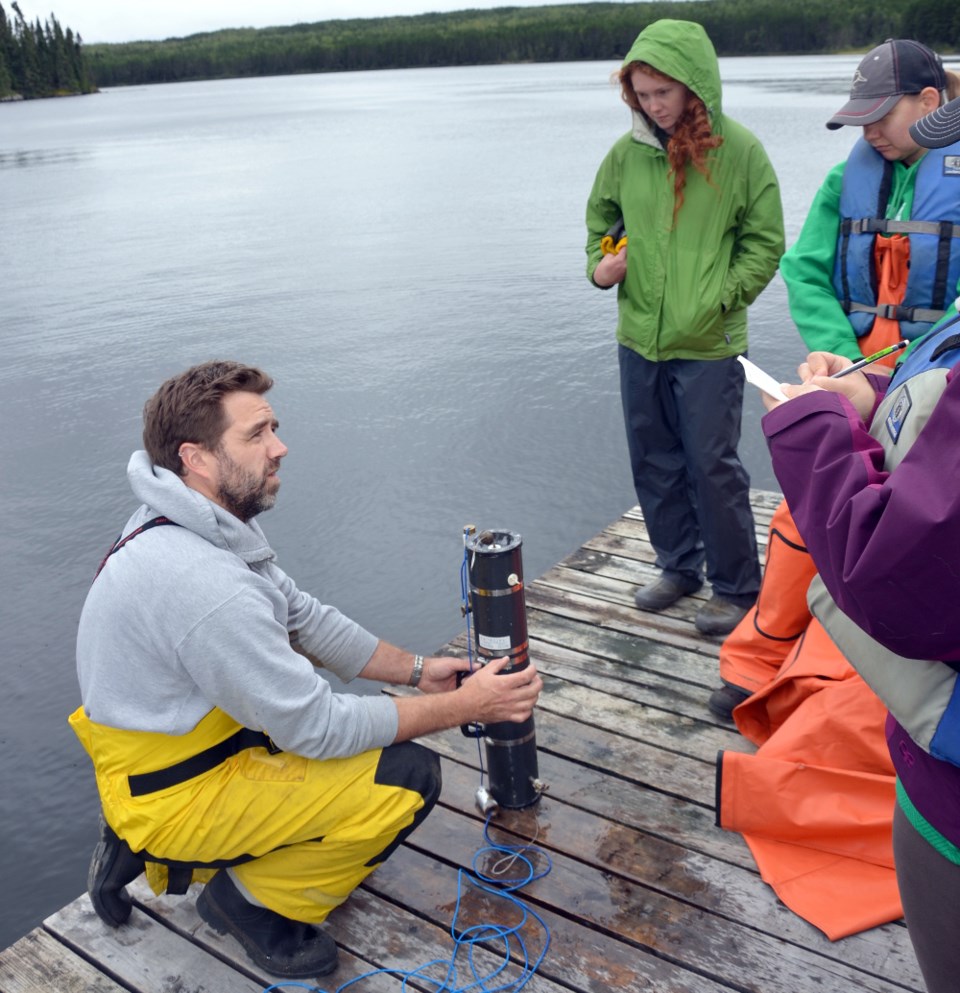 Dr. Michael Rennie demonstrated the proper use of a Van Dorn bottle, which collects water samples at known depths. Students were participating in the 2015 Experimental Limnology and Aquatic Ecology course that Dr. Rennie teaches at ELA. (Supplied).

THUNDER BAY -- The key to understanding how to recover and manage freshwater ecosystems across region may rest in tiny organisms found on the lakebed and larger ones found on Northern Ontario menus.

Michael Rennie, an assistant professor in biology at Lakehead University and Canada Research Chair in freshwater ecology and fisheries, was awarded a $100,000 Early Researcher Award Grant from the Ontario Ministry of Research, Innovation and Science.

With an additional $50,000 in funding from Lakehead University, Rennie will be looking at ecosystem restoration projects conducted at the IISD-Experimental Lakes Area (ELA) and along the north shore of Lake Superior.

“We are working on looking at bio-manipulation as a way of recovering ecosystems,” Rennie said. “We have a lake out in the ELA that was intentionally acidified back in the 1980s to try and answer questions about the impacts of acidification.”

“The lake has mostly recovered, but one thing that hasn’t happened though is there is this little freshwater shrimp called mysis that used to be in the system but are not anymore,” Rennie continued. “We just initiated an experiment this year where we are intentionally putting them back to see if they will actually take and if they take, what changes will happen in the ecosystem.”

“If we add this historical piece of the food chain back, will it alter the characteristics of lake trout that would bring it back to where it was before we started experimenting with the system,” Rennie said.

According to Rennie, there are many lakes across Northern Ontario, for example in Sudbury and in the Wawa area, that have experienced extremely high levels of acidification.

The research at the ELA will include introducing freshwater shrimp to the lake over the next three years and monitoring the system for the next five to 10 years, though Rennie expects to start seeing more immediate answers in the next three to four years.

“If we can do that, and this reintroduction experiment is successful, we can go to other lakes that have been impacted by industry like around the Sudbury area for example, and use the record in the sediment to find some lakes we might be able to apply this method as well,” he said.

Looking at a much larger body of water, Rennie will also be conducting research on migration patterns of walleye along the north shore of Lake Superior to better understand the state of the ecosystem and develop better recovery strategies.

“We know we can take the findings of what we have in our studies and scale it into the Great Lakes,” he said. “While mysis are not an issue necessarily in the great lakes, the one piece that we are looking at in the Great Lakes is the walleye population in Black Bay. That’s been the focus of recovery efforts since basically the fishery collapsed in the late 1960s.”

The Black Bay sanctuary is closed off to fishing, but research has shown that between 70 and 80 per cent of fish migrate out of that area travel as far as Thunder Bay and understanding where these fish move and spend time will determine how they are managed.

“Are we managing a Black Bay population or a north shore population and I think the approach to those two scenarios will be very different,” Rennie said.

Lake Superior appears to be faring better than some of the other Great Lakes, or even its historical records. It is still plagued by invasive species, such as the sea lamprey, but Rennie said walleye recovery, particularly along the north shore, has been an ongoing effort for more than 60 years.

“We tried stocking, we’ve tried closing fisheries, the whole bit,” he said. “They are starting to come back, but they are not back. It would seem to suggest we lack the information we need about how the system works to achieve recovery, or the system has changed so much that we can’t achieve it at all.”

Which is what Rennie is hoping his research will uncover because whatever purpose we see the largest lake on our doorstep serving, it requires proper and informed management strategies.

“Depending on what we want to be able to use Lake Superior for in terms of ecosystem services, in terms of supplying a sustainable fishery, for recreation, I think it’s important to keep a mind of managing the lake in a conscientious fashion,” Rennie said. “Some of that speaks to restoring certain aspects of the system.”