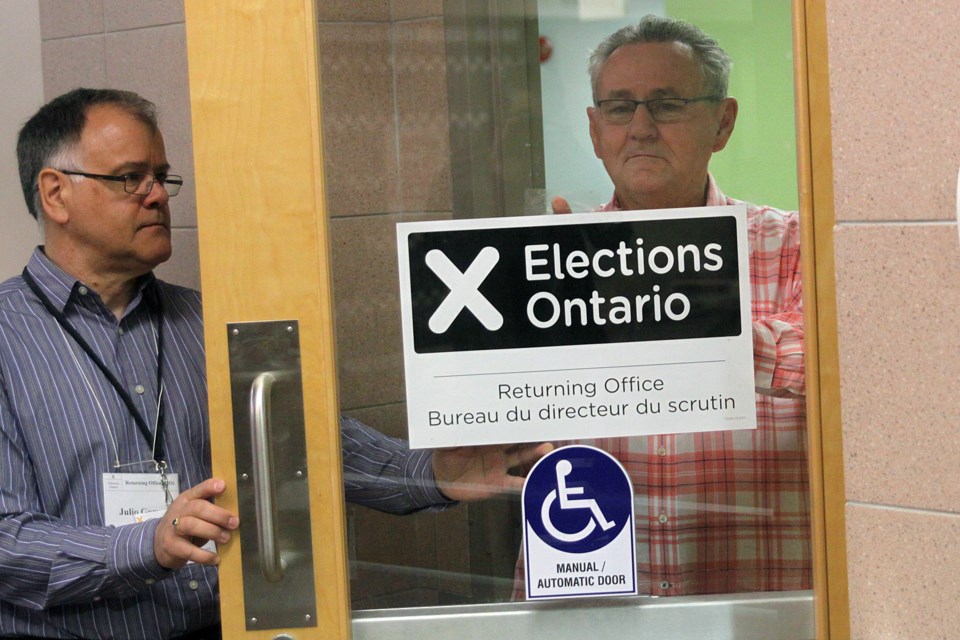 THUNDER BAY – Voters in next month’s provincial election will likely notice a more efficient process at many polling stations.

The writ for Ontario’s 42nd general election was officially drawn up on Wednesday, kicking off the 28-day campaign to elect the next provincial government on June 7.

This year’s vote will have some modernized elements compared to previous elections.

Thunder Bay-Superior North returning officer Julio Gomes said polling stations with more than 1,000 eligible voters – which he referred to as super polls – will utilize technology to streamline the process on election day.

“The super polls will basically have less paper. We’ll have computer tablets where the elector’s name appears automatically and we’ll have vote tabulators so once the elector has marked their ballot they take it to the vote tabulator. It’s run through the machine and if all goes well the elector will probably be in the voting location for about one minute,” Gomes said at the riding’s returning office in County Fair Plaza on Wednesday morning.

“The whole idea is to make this process as simple and easy for the elector as we can.”

Polling stations with fewer than 1,000 eligible voters, which include many in the smaller communities throughout the riding, will continue to utilize paper voters’ lists.

The returning office is currently staffed by about two dozen people but will likely hire a total of about 500 people by the end of the election, which includes advanced polls and staffing the 54 polling stations.

Advanced polls will run from May 26-30 at locations to be announced, as well as from May 26 to June 1 at the returning and satellite offices.

Voter information cards are expected to be sent through the mail in coming weeks but Gomes said people can verify the accuracy of their information on the Elections Ontario website or by visiting the returning or satellite offices.

“We do have a process to verify where people are living because the office is now open. If anyone has moved or had a change of address they can come in and speak to us about making sure that information is registered and we can get their voter card at the right location,” Gomes said.

Candidates can certify their nominations until the deadline on May 17.

In Thunder Bay-Superior North the Liberals have nominated long-time incumbent Michael Gravelle, the Progressive Conservatives are taking a second try at the riding with Derek Parks after he finished third in 2014 and the NDP have selected Lise Vaugeois. Other party nominated candidates include the Northern Ontario Party’s Andy Wolff, the Ontario Libertarian Party’s Tony Gallo, the Trillium Party of Ontario’s R. Louise Ewen and the None of the Above Party’s Edward Talbot, according to each of the party’s website.

Over in Thunder Bay-Atikokan, the Liberals are again running incumbent Bill Mauro while the PCs and NDP have each turned to first-time candidates in Brandon Postuma and Judith Monteith-Farrell respectively. That race also includes the Ontario Libertarian Party’s Dorothy Snell.

A Green Party of Ontario official earlier this week confirmed the party is in the process of nominating candidates in each of the two city ridings.

The Thunder Bay-Atikokan returning office is located in the former Hyde Park School on Walsh Street.

Attempted murder suspect in James Street assault case to seek bail
Aug 13, 2020 4:00 PM
Comments
We welcome your feedback and encourage you to share your thoughts. We ask that you be respectful of others and their points of view, refrain from personal attacks and stay on topic. To learn about our commenting policies and how we moderate, please read our Community Guidelines.
The latest on COVID-19 Local and global updates →
IT'S PATIO SEASON!
Patios That Are Now Open