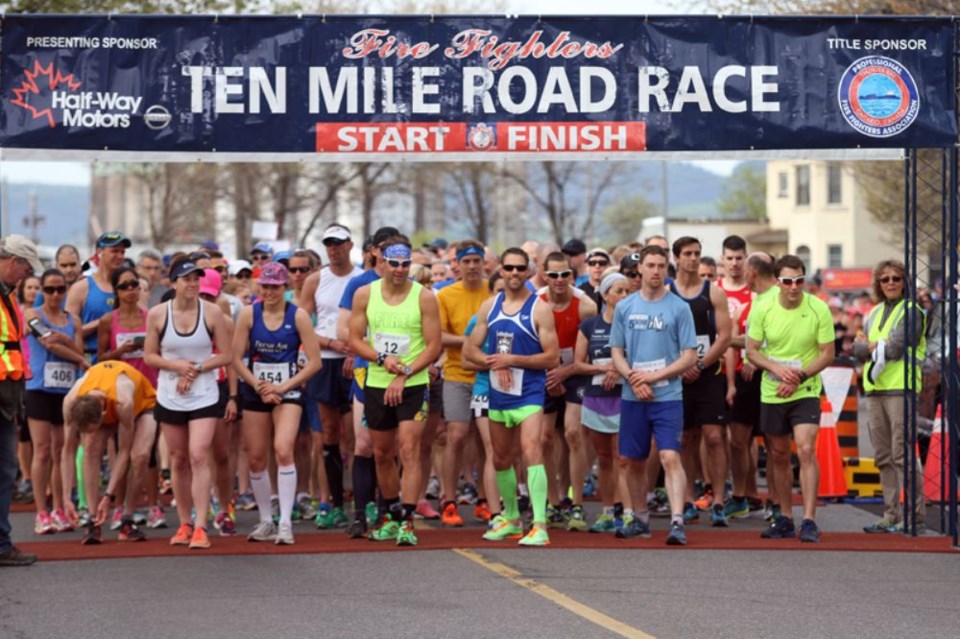 The Fire Fighters 10 Mile Road Race was cancelled due to the COVID-19 pandemic this year. (Nicole Dixon, tbnewswatch.com)

THUNDER BAY – Gary Young has run the 10 mile road race held over the Victoria Day weekend nearly every year since 1967, sometimes battling injuries or inclement weather. In 2007, he finished despite having a stroke while running (he won his division, he notes).

So when the Fire Fighters 10 Mile Road Race was cancelled due to the COVID-19 pandemic, it’s not surprising that Young sought a creative solution to keep the tradition alive. The running enthusiast decided to organize a virtual version of the race for those who don’t want to miss out.

The virtual race will be held May 18, with participants running solo and submitting times to be recorded by Young. There’s no entry fee or prizes; instead, Young is encouraging runners to donate to the COVID-19 Community Response Fund.

Participants this year will run alone on a course of their own choosing, including an option to run at home on a treadmill with one per cent incline. It will be a sharp contrast to the usual event, which draws up to 1,000 runners, including school relay groups, and hundreds of spectators.

“People may not notice anything,” says Young. “You don’t have a number on, you’re not running a certain route. I know a number of people are just going to run from their house.”

But despite the lack of fanfare and camaraderie that usually accompany the race, Young says the changes necessitated by COVID-19 will add some interesting twists to the competition.

“To tell you the truth, it might be more fun to run by yourself and have to compare times against other runners,” he says. “When you’re running in the race against 500 other people, I know exactly how I’m positioned. As a virtual run, you won’t know until they email their times back. So it might be a little more surprising as to who comes out on top.”

The race has a rich history, dating to 1910. It went dormant a handful of times in the following years due to world wars and periodic lack of interest. But Young says this year’s pandemic marks the first time since 1963 that it’s been cancelled, his virtual version notwithstanding.

In 1970, the race served as the national 10 mile championship. For Young, marking the 50th anniversary of that race, in which he participated, made it even more important to carry on the tradition in some form this year.

Young’s 53 years of running the 10 mile race put him close to a world record, he says – to his knowledge, the record stands at 58. He missed only one year, when a back injury forced him to miss 1984’s race.

Other regular participants may not quite match that impressive feat, but Young says he wants to give local runners who have run the 10 mile for decades a chance to continue their own streaks. Despite the less-than-ideal circumstances, he says those who have signed up are grateful to be able to carry on the tradition.

Young himself will be running right along with them, in spirit at least.

Runners can sign up by emailing garyyoungrunner@hotmail.com by the registration deadline of May 14. Name and age (as of May 18) are required to record running times.