The fact that police officials dismissed a fake news release as non-racial before completing an internal investigation shows the force’s inability to be objective about the incident, says Julian Falconer.
Sep 18, 2012 2:19 PM By: Jamie Smith 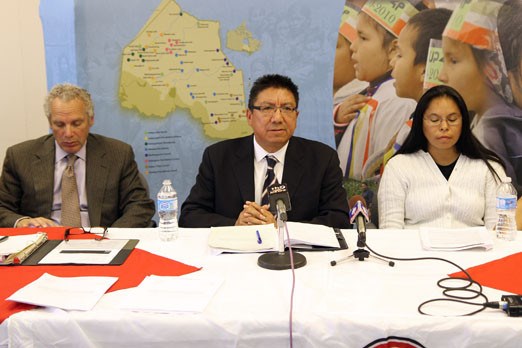 The fact that police officials dismissed a fake news release as non-racial before completing an internal investigation shows the force’s inability to be objective about the incident, says Julian Falconer.

Falconer, NAN’s lawyer, said comments made by police officials and mayor Keith Hobbs dismissing the release as not being racist before an investigation was complete shows that the service and board are incapable of investigating the matter properly.

“What a sorry and sad state of affairs,” Falconer said at a press conference Tuesday afternoon. “(Hobbs) has ensured a total loss of credibility for the Thunder Bay Police Services Board.”

Fiddler said they shouldn’t have jumped to conclusions about the nature of the release and that’s where a major concern lies.
“If it’s a real independent investigation they could have waited and said ‘here are the findings of our investigation’ and present that to the families,” he said.  “Instead they went on record jumping ahead of the investigation.”

Through the tribunal, Fiddler said it’s possible that an investigation might uncover a pattern when it comes to dealing with First Nations.
“This (incident) was a tipping point,” he said.

The complaint states that the release reflects and reinforces demeaning stereotypes about First Nations. It also reflects a widely held opinion that First Nations people are less worthy victims than others.

Falconer said the tribunal needs to look into the police service. If the accidental release was meant to be sent internally as a joke, he wants to know what else is happening.

“What precisely is going on at the Thunder Bay Police Service?” Falconer asked.

Chief Yellowhead said he and other grieving family members were disappointed when the read the release.  He said police are supposed to be there for all people.

“I wasn’t too happy with the remarks,” he said.

Fiddler said the incident has added to the family’s grief.

“Obviously they’re angry. They want to know why the Thunder Bay police did what they did,” he said.

Levesque called the decision to file a complaint unfortunate because it overshadows the efforts police have made to build and maintain bridges with First Nations. While the release was absolutely inappropriate, it could have been resolved in other ways.

“I don’t doubt that it caused hurt to the Yellowhead family. We have made efforts to involve the leadership of NAN to find suitable resolution to this and that didn’t happen. They’ve taken it a different way and yeah I’m discouraged by today’s announcement for sure,” he said.

The complaint makes reference to a meeting between police and NAN officials Sept. 5 in which Levesque said the issue was not racial based on a preliminary investigation. While he couldn’t speak about many details of the investigation, it wasn’t a difficult one he said. The officer involved never denied making the release.

“It’s not a complex investigation by any stretch it involves two witnesses basically,” Levesque said.

Levesque said the investigation is complete, that he’s reviewed it and it will make its way to the Ontario Independent Police Review Director sometime this week.

The complaint asks for systemic, public interest and monetary remedies. Hobbs said he couldn’t comment on the complaint.

Police association president Greg Stephenson said that he and his members are outraged by the complaint. Officers work day in and day out in a professional manner to serve all citizens of the city.

“The actions announced today are not in the best interest of any of the citizens of Thunder Bay. It is counterproductive to the meaningful partnerships that we have built between police and the citizens that we protect,” he said in a prepared statement.