Safety board releases report on Bearskin Airlines mishap at Dryden 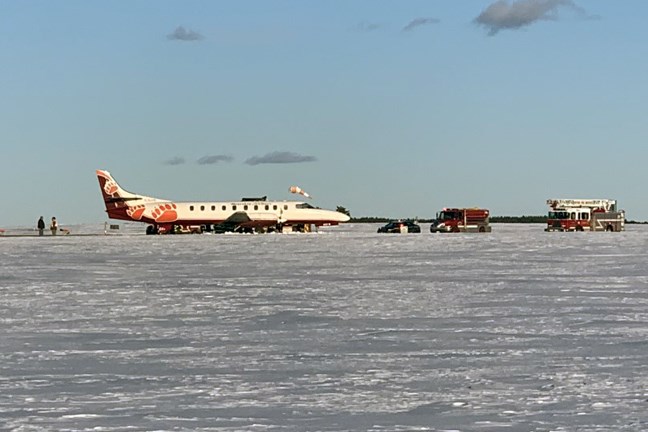 This Bearskin Airlines plane left the runway and struck a snowbank on takeoff at Dryden on Feb. 24, 2020 (DrydenNow photo)

WINNIPEG — The Transportation Safety Board blames the interruption of a checklist procedure – and an incomplete checklist – for an incident that saw a Bearskin Airlines plane veer off the runway during takeoff at Dryden in February 2020.

One passenger – curling coach Rick Lang – suffered injuries to his hand after the aircraft struck a snowbank, causing propeller blade fragments to penetrate the cabin wall.

The Fairchild Metro 23 aircraft was substantially damaged and was eventually sold for salvage.

The TSB report on the incident states that while the crew was carrying out a "Before Taxi" checklist, the task of disengaging the propeller start locks was interrupted and not completed.

"After the captain told the first officer to stand by, the crew's focus shifted to other tasks. It is likely that this slip of attention resulted in the engine power levers not being pulled over the flight idle gate to release the start locks," the report says.

It goes on to explain that because the Before Taxi checklist did not contain a task to ensure the start locks had been released, the crew began taxiing unaware that the right propeller start locks were still engaged.

The report also states that "During the takeoff roll...the engine torque differential was not noticed by the crew."

Since the right-side engine was unable to produce the required thrust, there was a significant thrust differential which led to a loss of directional control.

According to the TSB, after the incident, Bearskin owner Perimeter Aviation changed its procedures and checklists to better ensure that propeller start locks are disengaged before taxiing, and to raise awareness and understanding of the Metro aircraft's start lock system.