THUNDER BAY -- One person has been taken to hospital with unknown injuries following a frightening collision late Saturday afternoon.
0
May 17, 2014 6:24 PM By: TbNewsWatch.com Staff 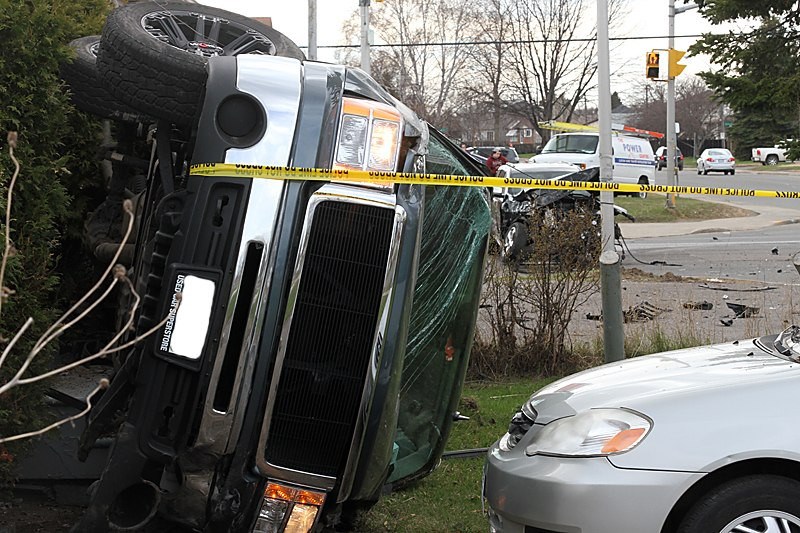 A pickup truck came to rest at the doorstep of a Northwood residence following a scary two-vehicle collision at the intersection of James Street and Churchill Drive. (Matt Vis, tbnewswatch.com)

THUNDER BAY -- One person has been taken to hospital with unknown injuries following a frightening collision late Saturday afternoon.

A pickup truck collided with a sports utility vehicle at the intersection of James Street and Churchill Drive after 5 p.m., with the truck coming to rest on its side in front of a residence on Churchill drive.

A Thunder Bay Police Service officer on the scene said the truck appears to have been travelling east on Churchill Drive and the SUV was southbound on James Street.

Many of the witnesses described hearing a loud bang at the time of impact and saw the truck roll through the parking lot of the confectionery at the southeastern corner of the intersection.

“It was slow motion,” Heather Kelner said. “Just like it was a movie, wow he rolled three times. I’m just thinking if there were any children outside.”

She said she saw the driver of the truck exit from the vehicle.

Another witness who lived nearly six houses down the block was working in his front yard and heard a loud bang and described seeing debris fly up before the truck rolled and come to a rest. He said it happened in a matter of seconds.

The front end of the SUV was mangled with debris scattered throughout the vicinity.

The officer said the driver of the pickup truck was transported to Thunder Bay Regional Health Sciences Centre with unknown injuries.