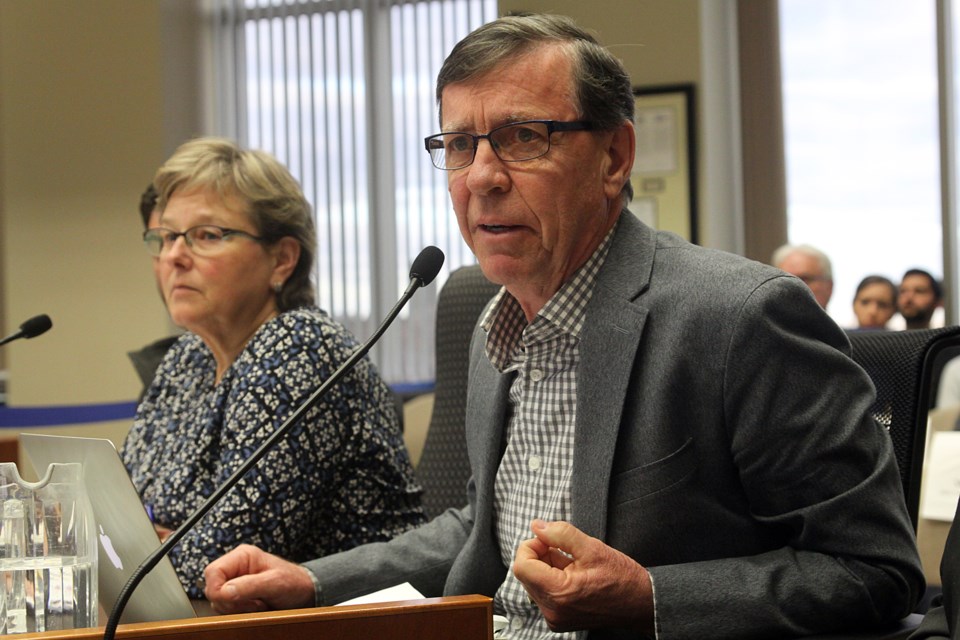 THUNDER BAY – Proponents aiming to sweep a national curling championship into Thunder Bay in two years are confident in the city’s chances of scoring the event.

Members of the local bid committee for the 2021 Scotties Tournament of Hearts appeared before city council on Monday night, making their case for why Thunder Bay could be selected to host one of the country’s marquee curling events.

If successful, the event would come 25 years after Thunder Bay last hosted the Canadian women’s curling championship in 1996 when Ontario’s Marilyn Bodogh claimed the title.

But the Pinty’s Grand Slam of Curling Tour Challenge, held in the city at the Tournament Centre last year, served as a reminder that Thunder Bay can pull off a world-class event.

“We recently proved that the community can do this,” said Rick Lang, a former world champion and prominent figure in the local curling community.

“We think that already with the buzz that’s been created in the community recently with curling events that this would be really exciting for our city and Northern Ontario.”

The Tour Challenge, which featured many of the world’s best teams, sold out months in advance and had four days of national broadcast coverage, with an estimated economic impact of $1.5 million.

The Scotties Tournament of Hearts, with an estimated economic impact ranging from $6 million to $12 million, would include 90 hours of national television coverage during the nine-day event.

One factor encouraging the bid would be the potential for Team McCarville – a seven-time Scotties participant and 2016 national runner-up – to finally play in the event in front of a hometown crowd if they were to qualify. Skip Krista McCarville, lead Sarah Potts and alternate and former world champion Lorraine Lang were in the public gallery during the presentation.

“There’s no doubt about it. Thunder Bay is a curling town with a very rich history of involvement in the sport,” said Northwestern Ontario Sports Hall of Fame executive director Diane Imrie, who is a member of the bid committee.

The event comes with a minimum hosting fee of $400,000, an amount the proponents said they would seek through municipal accommodation tax revenue from the Thunder Bay Community Economic Development Commission’s tourism stream.

Imrie said Curling Canada would cover all other event costs, including any potential revenue shortfalls.

The Fort William Gardens would host the event, though the facility would require what organizers called a couple of “creative solutions” to be a viable venue. Curling Canada requires a video scoreboard or video screens, which the facility does not currently have. As well, broadcaster TSN needs 10 rooms for its staff and would likely have to use trailers outside the building.

Imrie said hosting the event could lead to opportunities to seek provincial or federal capital funding programs for upgrades to the Fort William Gardens, or the adjacent Fort William Curling Club that is proposed to be used as the event’s social gathering spot and watering hole.

Hosting the event could result in the temporary displacement of the two hockey teams that are the primary tenant of the Gardens – the Thunder Bay North Stars and the Lakehead Thunderwolves.

“The caveat there is the Thunderwolves would have to make the playoffs,” tourism development officer John Cameron said.

Organizers asked council to endorse their bid, saying that could go a long way with Curling Canada, and approve the Gardens as the host venue.

“I think this is one of the closest things to a no-brainer that there is,” Coun. Andrew Foulds said.

Council will vote on whether to provide the endorsement at a future meeting.

The committee must submit their final bid application to Curling Canada by the end of June. A ticket pre-sale campaign is expected to be launched in the coming weeks. The selection of the host city is expected to be announced in October.