Proceeds to be split evenly between the George Jeffrey Children's Foundation and the Thunder Bay Professional Firefighters' Toys for Tots campaign.
Nov 12, 2020 1:33 PM By: Leith Dunick 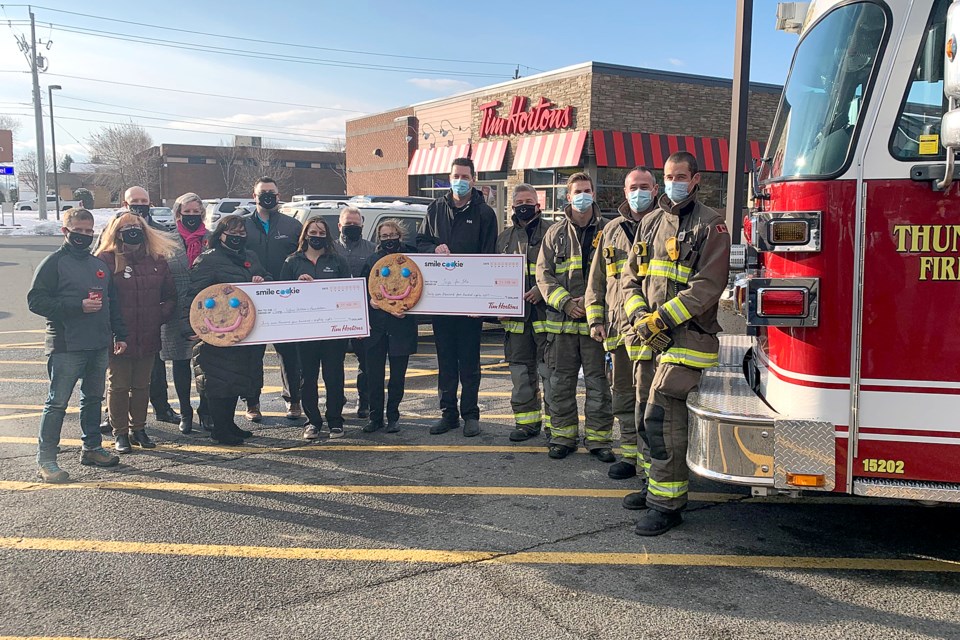 THUNDER BAY – Not even a pandemic could slow down this year’s record-setting Tim Hortons Smile Cookie campaign.

The week-long event raised a record $74,977, which will be split between Toys for Tots and the George Jeffrey Children’s Foundation, the third year the two charities have halved the proceeds.

Seeing a cheque for half that amount, $37,488, was a sigh of relief for Paul Penna, who heads the Thunder Bay Professional Firefighters’ Toys for Tots drive.

Given the situation surrounding COVID-19, Penna said they weren’t sure what this year’s campaign would bring.

The Smile Cookie campaign result is a great start.

“This year there was a lot of uncertainty for us. It’s a COVID year and we really don’t know what’s going to happen with our campaign, how successful it’s going to be and if we’re going to be able to take care of all of the kids,” Penna said.

“Certainly today there’s a lot of reason for optimism with what Tim Hortons and the owners and the employees and, of course, the people of Thunder Bay who bought the cookies, raised this crazy amount of money for us. We’re off to a good start.”

Though Toys for Tots does not set an annual goal, a good ballpark is about $150,000. Thursday’s donation takes them about a quarter of the way there.

Each Christmas, firefighter volunteers collect donations at their booth at the Intercity Shopping Centre. This year, they’re adding a different method to donate, a more modern touch to their traditional walk-up donations.

“We’re also launching an online effort,” Penna said. “We have a website. It’s www.tbaytoysfortots.ca and there’s an avenue to donate online there. We’re really hoping that gets us through to meet our goals to take care of all the kids this year.”

Tina Bennett, the CEO of the George Jeffrey Children’s Centre, said the amount of money raised by Tim Hortons in 2020 is simply amazing.

“We’re just so pleased at how the community came out for us this year in the middle of a pandemic, how supportive all the Tim’s staff was. They’re great employees and even with all the COVID restrictions, they still made this work,” Bennett said.

The donation will have a major impact on their operations, allowing the Walsh Street centre to expand its programming and help more children with developmental disabilities live a more normal life.

Bennett said she had no idea what to expect this year.

“I think we all thought we wouldn’t raise as much this year for the charities because of COVID and the difficult time we’re all experiencing with this pandemic,” Bennett said. “We were just blown away when Tim’s started to say, ‘We’re starting to run out of icing and we’re not sure what we’re going to do.”

The proceeds of each $1 cookie were turned over to the charities.

Brent Prepp, who owns five local Tim Hortons franchises, said he’s not sure why they sold so many cookies in 2020.

“I think every year it gets more momentum and word just gets out there with social media more and more and it gets bigger and bigger. It’s fantastic, Prepp said.