Jonathan Kaminawash has spent most of his life feeling alone. He endured verbal and physical abuse in school by his peers and while he says it still continues, the 18-year-old Hammarskjold High School student doesn’t let it bother him as much.
Apr 23, 2010 5:40 PM By: Jodi Lundmark 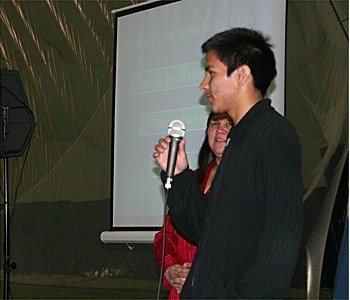 He endured verbal and physical abuse in school by his peers and while he says it still continues, the 18-year-old Hammarskjold High School student doesn’t let it bother him as much. The teen is also a recovering alcoholic and drug addict; he turned to the mind-altering substances after his father passed away. He’s been clean since early last year.

Friday morning Kaminawash shared his story with his peers and community members at the Sports Dome when the Thunder Bay Youth Suicide Prevention Task Force released their Youth Voice report on youth suicide.

"It felt important to me to share my personal life," Kaminawash said, adding he wanted to relay a message of hope for youth, especially those living in remote First Nation communities.

"There are people you can talk to, not only your family but friends and strangers," he said. "When it comes to talking about your personal life, it gets scary. You get shy and nervous and it’s all right to be like that. Just hang in there and things will work out for the best in time. You’ve just got to wait it out."

Kaminawash was joined by other youth sharing similar messages. Superior Collegiate and Vocational Institute student Courtney Pennock said teens shouldn’t be afraid to be themselves.

"It’s how you have to live the rest of your life and you should never be ashamed of expressing what you feel and who you want to be," she said. "It’s something you shouldn’t be afraid of."

As a teenager, Pennock said suicide is frightening to her.

I know a lot of people who have had people close to them commit suicide and it’s very – it touches a never for me because it scares me into thinking I don’t want this happening to somebody I know," she said. "It doesn’t make you feel good as a teen because you think if it can happen to them, it can happen to anybody."

The youth suicide prevention task force visited seven city high schools and consulted with more than 200 students to find out what youth think needs to be done about the issue.

Youth consultation co-chair and mental health worker Melanie Tibishkogijig said what surprised them most was the answers given to them by all seven groups were basically the same.

The youth said more accessible and affordable activities for them were needed and that more access to professional help was also important. They also said more traditional and cultural activities were necessary.

"Youth suicide is happening out there and we need to bring that awareness," said Tibishkogijig. "It’s something nobody wants to talk about; it’s all hush-hush."

She added what the youth are asking for is for someone to sit and listen to them, to talk them through their feelings and let them know where to go for help.

Now that the recommendations have been made by the youth, Tibishkogijig said it’s time for the community to take action. The task force will be brining the results of the report to city council in the near future.