The studio host for Blue Jays broadcasts drove 15 hours to Thunder Bay to drop off supplies for First Nations communities in Northwestern Ontario.
May 30, 2020 11:21 AM By: Leith Dunick 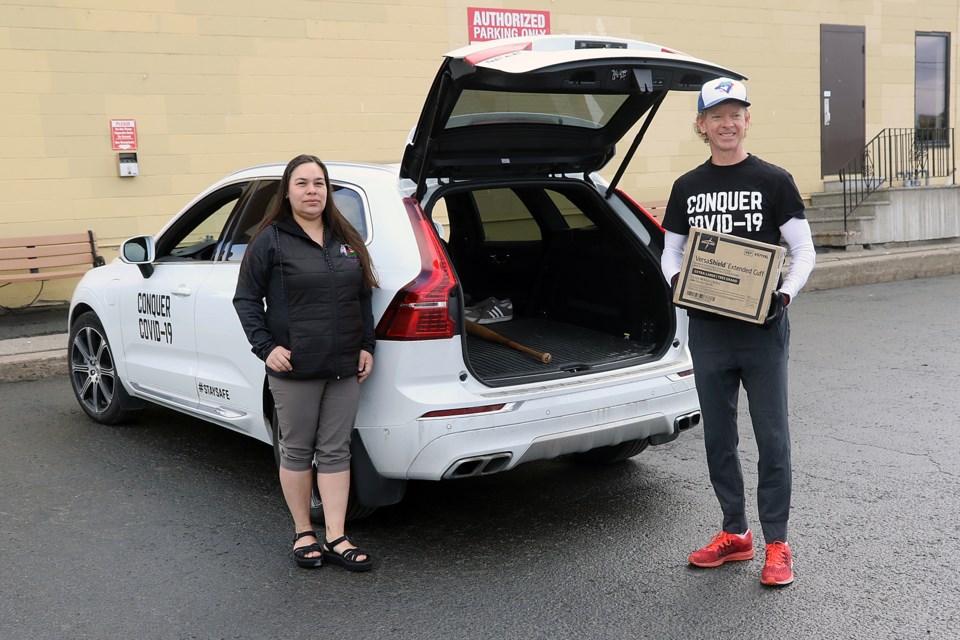 THUNDER BAY – Jamie Campbell was quick to sign on to the Conquer COVID-19 movement – and equally as quick to insist that Canada’s northern communities not be left out.

He meant it, too.

Campbell made two stops in the city on Saturday morning, dropping off supplies headed to Bingwi Neyaashi Anishinaabek. His whirlwind tour of the north concluded at the Court Street offices of Matawa First Nation, where he unloaded several boxes of masks, gloves and other supplies destined for five fly-in communities north of Thunder Bay.

Early on in the Conquer COVID-19 effort, a movement inspired by hockey legend Haley Wickenheiser and given a massive social media boost by Deadpool himself – Canadian actor Ryan Reynolds – Campbell said he saw a lone tweet from a paramedic in Timmins on the hunt for PPE supplies.

“When I was a teenager, I spent a couple summers in Timmins and it had a very profound impact on me. As soon as I saw the tweet, I replied to the guy and I said, ‘I’ll figure something out.’ They needed PPE and if I have to do I’ll drive it myself,” Campbell said.

“Within about three days I had a vehicle full of PPE and had plans to be in Timmins. Timmins is the reason I volunteered for the northern drives. But because of my experience there I knew that it was important for the big city, like the GTA, to understand that everybody needs our help.”

Driven by a mix of doctors, business leaders, entrepreneurs and celebrities, the Conquer COVID-19 movement, which wrapped up its campaign on Friday, raised more than $2.5 million in its efforts to source and deliver PPE that was in short supply to those who desperately needed it in the health-care community.

“The scope of some of the communities, the distance geographically, if there’s a second wave, it’s going to be very important that everybody has much protection as possible. I’m glad I could bring everything here to Thunder Bay and then it’s distributed where it needs to go in time,” Campbell said.

David Paul Achneepineskum, CEO of Matawa First Nations, said he was grateful to see someone like Campbell willing to hop in his vehicle and make a gruelling trek into the region to help keep his people safe.

“It’s a real honour for him to do this for us,” Achneepineskum said.

Although COVID-19 had minimal impact in the region, with slightly more than 100 confirmed cases in Northwestern Ontario, it did manage to find its way into Eabametoong First Nation, a fact that hit home just how vulnerable remote Matawa First Nation communities are.

“It really rang the bell in our communities that we needed to be a little more vigilant. We need more personal protective equipment. There really wasn’t that much at all. We were scrambling around to get some. Everybody else was scrambling around too. It was almost like there was a black market out there for these kinds of things ... Conquer COVID-19 came through for us.”

Earlier this month the group delivered a truckload of PPE supplies to Matawa First Nation.