Staal does't relish being away from family to play

Minnesota Wild veteran says the scenarios unfolding for the NHL to return are hard to fathom.
0
May 23, 2020 1:31 PM By: Leith Dunick 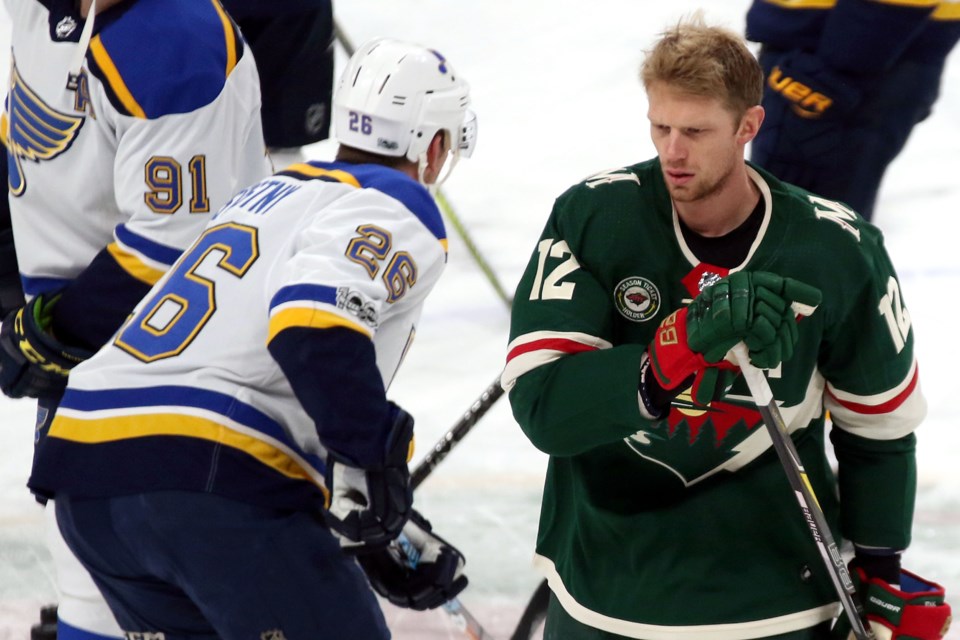 The Minnesota Wild's Eric Staal skates during warmups on Saturday, Dec. 2, 2017 before a game against the visiting St. Louis Blues at the Xcel Energy Center. (Leith Dunick, tbnewswatch.com)

ST. PAUL, Minn. - For a family man like Eric Staal, the idea of being away from home for possibly weeks or months does not sit well.

The payoff, of course, could be a second Stanley Cup championship.

More and more, it's beginning to look like if the National Hockey League does resume its season at some point this summer, Staal's Minnesota Wild will be invited to the pre-playoff dance.

Multiple reports suggest the league is considering a 24-team return, with the top four teams in each conference earning byes and the next eight teams playing a best-of-five play-in series for the right to advance to the first round of the post-season.

When the NHL abruptly halted its 2019-20 campaign in March when the COVID-19 pandemic struck, were 10th in the Western Conference, but only one point out of a playoff spot.

Should the league decide to restart the season at some point, it's believed the Wild would face off against the No. 7 Vancouver Canucks, a team they've beaten twice this season.

However, unless Minnesota is chosen as one of the hub cities the NHL is considering to host fan-less playoff games, it could mean Staal and the Wild would be sequestered away from home for the duration of their summertime run.

The further Minnesota goes, the longer the 35-year-old would be in hockey isolation.

It's not ideal, he told the team's beat reporters on Friday during a Zoom interview session. but he'll do it.

“It’s hard right now to envision, me personally, coming back and playing in a city away from your family for a couple months and in front of no fans,” said Staal, who had 19 goals and 47 points in 66 games this season.

“I feel like that’s a little bit difficult to envision, but there’s been a lot of things that have been difficult to envision getting to this point.I think it’s just hard to really see where this is going to finish. But I know they’re still trying to gameplan it and figure it out.”

Staal said he's not worried about the on-ice competition level, but did say it won't be the same playoff atmosphere playing in empty arenas.

It's going to be different, that's for sure, he said.

“The whole thing is still difficult for me to kind of fathom and understand. I think as any kid, you dream of winning a Stanley Cup and that energy and that momentum and those moments of memory are with fans and with people and with excitement. To go through the playoff run with nobody in the building is going to be really weird and different.”

Looking ahead, Staal, who grew a full beard, shaved it down to a goatee and then finally a fu manchu moustache during the shutdown, said a match-up against the Canucks would make for an entertaining series. Vancouver is an up-and-coming team, with rookie-of-the-year candidate Quinn Hughes on defence and sniper Elias Pettersson up front leading the attack.

“They’ve had a good year and they’ve got a lot of good young players ... So good balance and it would be a good matchup, a very good team. If that was the case, we would have our work cut out for us.”

Video: May 29, 2020: Ventilator production starts at Bombardier
May 30, 2020 1:02 PM
Comments
We welcome your feedback and encourage you to share your thoughts. We ask that you be respectful of others and their points of view, refrain from personal attacks and stay on topic. To learn about our commenting policies and how we moderate, please read our Community Guidelines.
The latest on COVID-19 Local and global updates →
Support local: Delivery, takeout & more
View local businesses