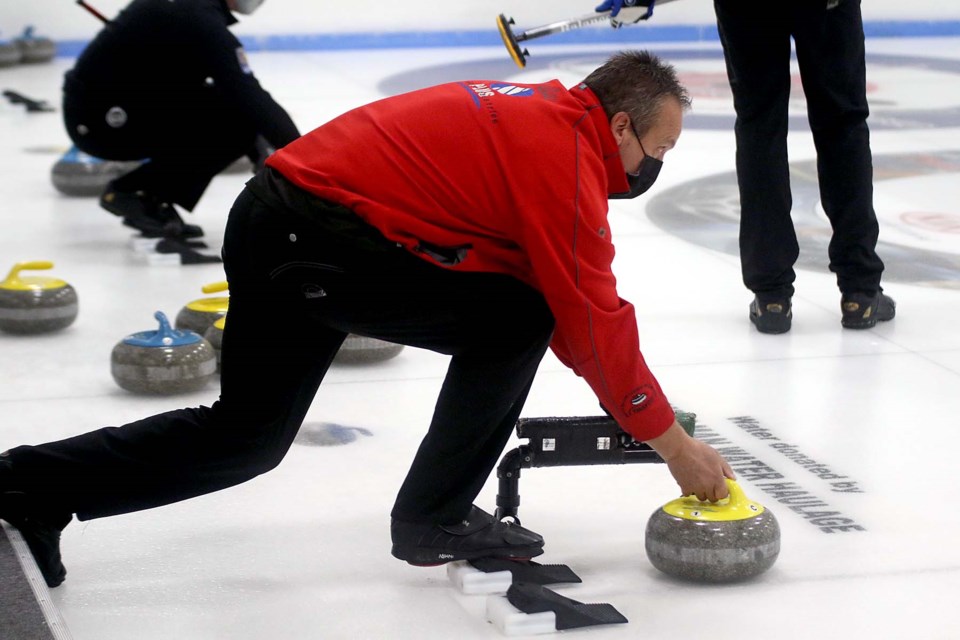 THUNDER BAY – Coming off a loss last week and his playoff hopes already starting to fade, Mike McCarville needed a big win to stay in contention in the Tbaytel Major League of Curling standings.

He only needed four ends to get it.

On a night when masks became mandatory, the Thunder Bay skip made a delicate hit-and-stick through traffic for a triple in the second end on Wednesday night at the Kakabeka Curling Club to jump in front of Mike Desilets squad 3-1. He put away the match in the third with a steal of four to claim a convincing 7-1 victory.

“We've been in a little slump. It's good,” said McCarville, who struggled to a 1-4 start to the season.

“There was a lot of curl out there today, so I think we just picked up on that quicker. Where we were getting by the guards, they were crashing on the guards and that was the difference. It resulted in a couple of big ends for us.”

By scoring three early, it forced Team Desilets (2-3) to play aggressive and take risks going forward, which worked out to McCarville's advantage.

“That's what you have to do in curling. If you're down a bunch of points you have to take a bunch of gambles. The gambles didn't pay off this time for them, but that's the way to play the game.”

Team Desilets got one back in the fourth, but down 7-2, conceded after four ends.

It didn't take Mike Pozihun much longer to end his match, a 7-1 triumph over Trevor Bonot, who in his previous two matches knocked off the last two remaining undefeated teams.

It was all Pozihun on Wednesday night.

He had a chance for a draw for four in the opening end, but came up short and settled for three. It was all he would really need.

Forcing Bonot to take risks of his own to get back in the match, Pozihun stole a single in the third, two more in the fourth and ended the match with a final steal of one in the fifth to up his record to 2-3.

“We got a little lucky in the first. Both teams missed quite a few shots. But we got a couple of breaks. We actually had a draw for four and we came up just short, but we were fortunate,” Pozihun said.

Like McCarville, the veteran skip was just glad to be back in the win column.

“They're a good team. Anytime you're playing Trevor he's going to pull something out of his hat,” Pozihun said.

Bonot came close in the fifth.

With three of Pozihun's stones buried in the rings, he attempted an angle raise off one of the nine guards circling the house, but the shot just missed, rolling too far to give Pozihun a steal of two and a 6-1 lead.

Two sheets to his left, Bryan Burgess knocked Al Hackner out of a tie for top spot, scoring deuces in the first and third ends to go up 4-2 and putting it away with a triple in the fifth en route to a 7-4 triumph,

Burgess said his team has been a little streaky this season, opening with a pair of wins before dropping two in a row – only to come back and win his last two matches.

“We made a couple of shots today and the team came out to play,” said Burgess.

“Anytime you play Hackner you want to have your best game and I think tonight we did.”

In the night's only other match, Ben Mikkelson snapped a three-game slide, scoring once in the seventh to even his match with Gary Weiss, then stealing another point in the eighth to claim a 6-5 win.