Spit hoods will be introduced next month, augmenting safety training most paramedics have already undergone, and increased information from police.
Nov 9, 2019 8:32 AM By: Leith Dunick 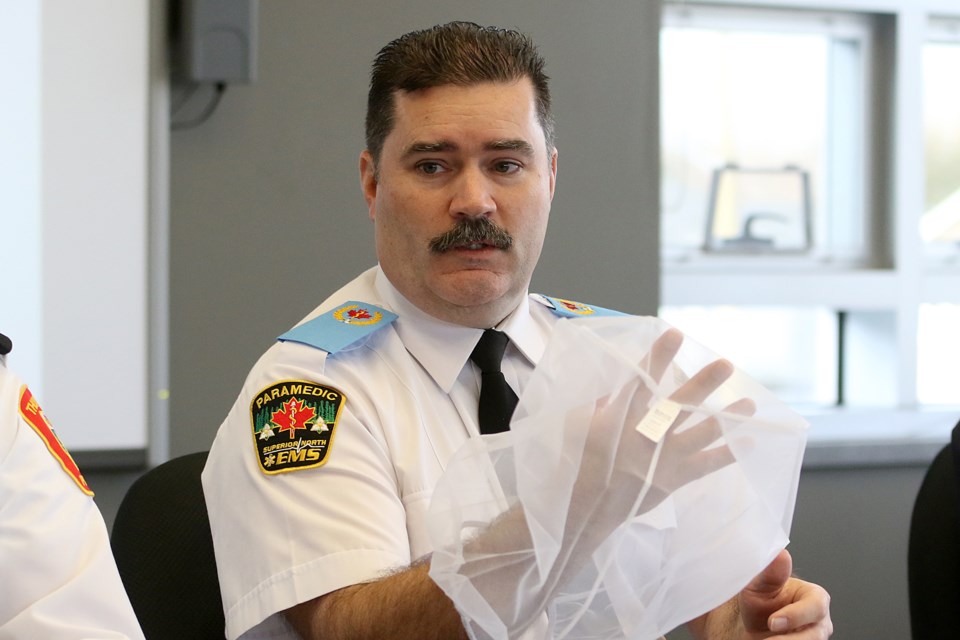 Superior North EMS Deputy Chief Andrew Dillon on Friday, Nov. 8, 2019 unveils a spit hood, which paramedics will deploy on the job, when needed, starting in December.

THUNDER BAY – A week ago, paramedics were assaulted three times in one night while performing the duties of their job.

It led to union officials calling for stronger safety precautions being put in place to ensure their safety in the field, including a call for ballistic armour.

Superior North EMS Deputy Chief Andrew Dillon on Friday said the organization won’t go quite that far, but starting next month, will allow paramedics to use spit hoods on patients who have spit at them while being treated.

The circumstances under which they’ll be deployed will be subject to strict guidelines, and they’ll only be allowed in use once paramedics are fully trained on their proper use.

It’s one of several steps, including scene management and defence tactics training to ward off kicks and punches, and better co-operation with the Thunder Bay Police Service to provide a heads up if paramedics are heading toward a known rough spot in the city.

According to statistics provided by Superior North EMS, in the past two-and-a-half years, paramedics have been assaulted at least 52 times while on duty, a little less than one per cent of the 58,944 calls they responded to between the beginning of 2017 and October 2019.

Spitting incidents comprise 17 of the 52 assaults, with being kicked or punched occurred nine times each.

“We’re going to find whatever solutions we can to keep them safe, whether that be training, tools, protocols – whatever we can – to allow them to do their job as safely as possible.”

The spit hoods are the latest tool in the EMS arsenal.

Dillon said if a patient tells a paramedic they plan to spit on them, or they already have, the patient will first be told to stop spitting and warned if they don’t the spit hood, a mesh bag, essentially, will be placed over their head until the situation diffuses.

“We have policy in place that ... allows us to use them, basically when (patients) are assaulting them,” Dillon said.

Having better co-operation with police is also key.

Paramedics are taught to be observant of their surroundings, looking, or even asking, for things like broken bottles or other potential weapons, but having the heads up allows them to better assess where they’re going – and at times convinces them they’re better off waiting for police to arrive on scene.

“Sometimes we didn’t get enough potential information about potential violence or issues we may (find) on scene. We may get a cardiac call, but it may be in a place that’s known to have drug activity or there may be other issues with the people who may be residing at that residence, “ Dillon said.

TBPS Insp. Derek West said police are limited in what they can say, but have worked out a system to provide as much information as possible, after being approached last spring.

“We assessed what type of information we could give them and decided there would be a way we would be able to provide safety information on the potential for violence at a particular location,” West said, adding it’s based on police intelligence and real-time information provided to 911.