Aya Wadi and her family fled war-torn Syria in 2017 and have since opened a catering business and restaurant featuring the cuisine of their homeland.
Dec 20, 2020 8:31 AM By: Leith Dunick 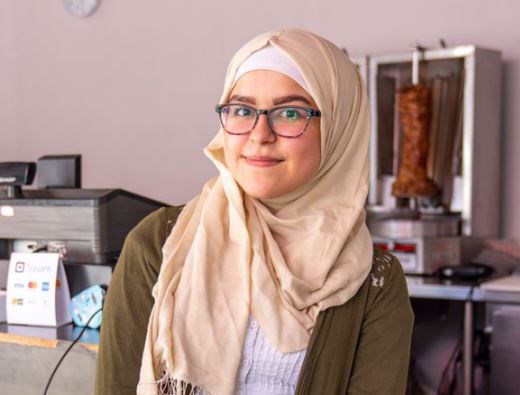 Aya Wadi and her family fled war-torn Syria and eventually made it to Canada as refugees in November 2017. (Supplied photo)

THUNDER BAY – Aya Wadi is happy to share the cuisine of her Syrian homeland with the rest of Canada.

It’s a good way to let her fellow Canadians know how thankful she is for welcoming her and her family to the country with open arms, after fleeing the war-torn Middle Eastern nation in search of a better life.

Wadi’s recipes are featured in Tastes from Home: Recipes from the Refugee Community, a free cookbook launched to mark the United Nation’s High Commission on Refugees’ 70th anniversary.

It’s been more than three years since her parents and siblings left Syria, arriving in Thunder Bay during a late November heavy snowstorm.

Wadi jokes in the cookbook that her parents through they’d landed at the North Pole when they left the airport, heading for their new life the relative safety of Northwestern Ontario.

That was three years ago. Snow is passé now for the family, which opened the Royal Aleppo Food restaurant, where they serve up Syrian dishes, drawing on the cuisine of the city the restaurant is named for.

Wadi and her family lived in Aleppo until 2014, but escalating violence and a bomb landing a little too close for comfort finally convinced her parents it was time to leave, rather than continue to move from place to place in an attempt to evade the continued bombing that surrounded them.

After thieves stole everything from their home after they abandoned it during an aggressive bombing attack, they made their way to Turkey, but struggled in their temporary home, where racism and prejudice against refugees was all-too-common.

Life in Thunder Bay is a far cry from her former life, and leaving was probably the best decision she and her family have ever made. Taking part in the cookbook project was a chance to say thanks, while also encouraging other refugees by showing them what’s possible in a new country like Canada.

“I’m so glad, so happy to share some of our recipes in the cookbook,” Wadi said. “I’m so grateful for all the people who have supported us all over our journey. It’s really nice to share some of our own touch. Because all the recipes we shared, my mom created and improved it with my Grandma.

“So it’s not just like we created them now, it’s over two generations.”

The recipes the family provided for the cookbook include Ma’amoul cookies, with dates and pistachios, ouzi, a chicken- or beef-stuffed spring roll, and muhammara, a tomato-and-onion-based sauce featuring pomegranate and molasses.

“We were struggling,” she says in article accompanying her recipes in the cookbook. “People didn’t like us. So, we had two options: find a better place, or go back to Syria. It’s hard for the first one, and the second one is impossible.”

A United Nations official directed the family toward Canada. They applied for refugee status, after carefully researching the country and made their way across the Atlantic to their new home, where the 24-year-old Wadi initially opened a catering company, which proved so popular they were able to open a full-fledged restaurant, in the middle of a pandemic, first offering takeout and later, as COVID-19 restrictions were eased in the summer, full dine-in service.