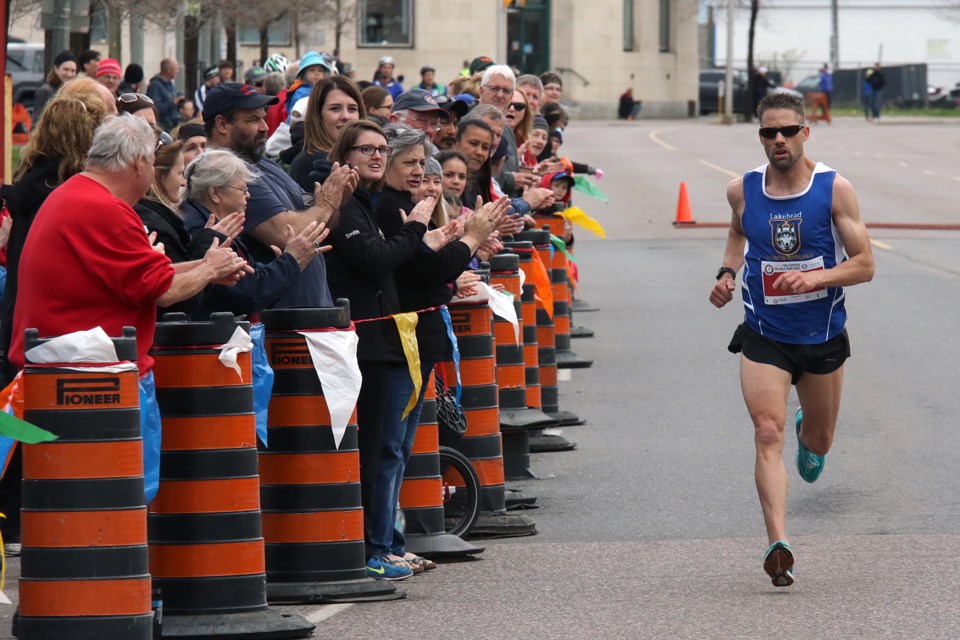 Trevor Zimak will look to win his fourth consecutive 10 Mile Road Race on May 21. (File photo)

THUNDER BAY - One of Canada’s oldest road race is going strong at 86 years.

Race director Herbert Daniher confirmed at a press conference on Friday that three-time defending champion Trevor Zimak will be participating, alongside Thunder Bay’s top runners, and a number of out-of-town participants.

“All of the competitive runners are going to be at the race,” Daniher said. “If we get some runners from out of town, they're going to push everybody. We’re looking forward to a good pace.”

The road race has a rich history in the city, and is held each year with the help of Thunder Bay Fire Rescue.

Local firefighters have participated as a sponsor for 43 years, and for Darren Smallwood, he’s laced up his shoes for 27 of them.

“You wonder each year if you have enough prep time in the bank, but we’ll see on race day” he said amid laughter.

Smallwood and the rest of the firefighters will run in memory of Kevin Kennedy.

“I had the good fortune of working with Kevin, and he was a prime motivator in getting the firefighters involved for the race.”

Kennedy, a beloved former firefighter and long-time race participant, died on a boating trip in 2011.

“We look forward to keeping that going in memory of him.”

For the third consecutive year, proceeds will help fund runners from Sandy Lake First Nation, with all of the proceeds from this year’s race helping with the travel costs.

“It’s wonderful to encourage running and physical activity for those communities who don’t have access to it,” said Smallwood

The fly-in First Nation is located 600 kilometers from Thunder Bay, but their athletes have become regulars in recent years

Daniher, meanwhile, is urging volunteers to continue their support, and urges any runners to sign up in the coming week before the race.

“It doesn’t happen without a whole bunch of volunteers,” he said.

Donations and registration can be made through their website at 10mileroadrace.org.

Police seek help surrounding possible shooting incident
May 27, 2020 11:51 AM
Comments
We welcome your feedback and encourage you to share your thoughts. We ask that you be respectful of others and their points of view, refrain from personal attacks and stay on topic. To learn about our commenting policies and how we moderate, please read our Community Guidelines.
The latest on COVID-19 Local and global updates →
Support local: Delivery, takeout & more
View local businesses