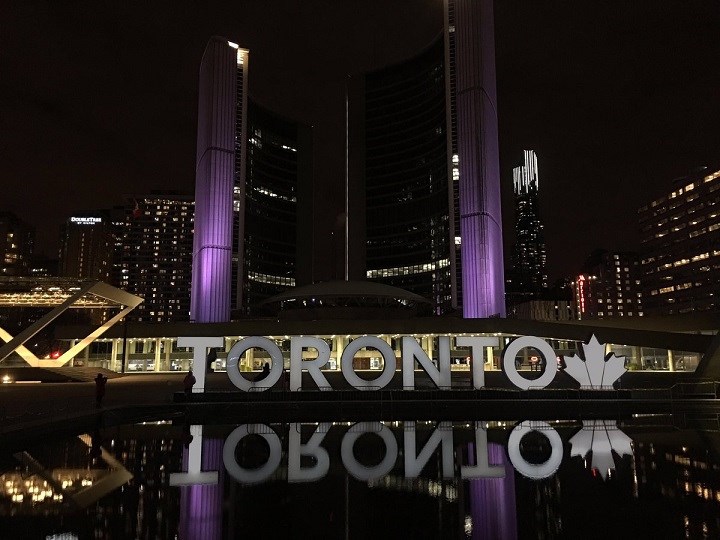 Toronto's letter sign has become one of the most photographed locations in the city. Council approved a similar sign for Thunder Bay on Monday.

THUNDER BAY – Deep divisions on the financial implications of COVID-19 and the recent approval of the multi-use sports facility were evident as Thunder Bay city council spent over an hour and a half debating a proposed $150,000 letter sign for the city’s waterfront Monday night.

The proposal eventually passed on a 7-6 vote, but not before sparking acrimonious debate over how the city should handle the financial uncertainty of the pandemic.

The letter sign was put forward by the city’s 50th anniversary committee as a legacy project to commemorate the milestone and boost tourism. It’s modeled on signs that have proven popular elsewhere, with Toronto’s estimated to be the second most photographed location in the city, after the CN Tower.

Proponents argued the project could be a significant draw for cross-country travellers, motivating them to leave the highway and stop at the city’s downtown.

Several argued the project would have no tax implications, since it would draw on reserve funds raised from the city’s municipal accommodation tax (MAT), a four per cent charge added to the price of short-term stays in the city.

Council approved spending up to $100,000 from MAT reserves on the sign, while it will approach the Community Economic Development Commission to request it contribute the remaining $50,000. The CEDC receives half of MAT revenues to promote tourism efforts.

If fully spent, that will leave about $131,000 unallocated in the city's MAT reserve fund.

City treasurer Linda Evans told councillors the reserve was intended to be used for projects that promote tourism and benefit residents and visitors, but its use was up to council's discretion.

Opponents objected to the idea the decision would have no tax implications, saying the commitment would require council to dig into tax revenues for other projects that could be supported by MAT funding.

“Don’t pretend it doesn’t have tax implications, because that is a load of bull,” said Coun. Brian Hamilton.

She argued that provided evidence a letter sign would resonate and help build the city’s image.

Opponents expressed concern over committing funds for a new, non-essential infrastructure project given the uncertain financial impacts of COVID-19 and the city’s difficulty in maintaining its existing infrastructure.

Hamilton expressed frustration over the decision, saying the city was already struggling to maintain existing assets like the botanical conservatory. A similar amount of money would allow the city to reopen the conservatory’s long-shuttered side wings, he said.

Like many of the project’s opponents, he praised the idea of a letter sign but argued it was the wrong time to commit to it, given council’s approval of a multi-use sports facility that could cost up to $48 million all in, according to the CEDC, and the uncertain impacts of COVID-19.

The city’s commitment of its 2020 MAT revenues to the indoor sports complex means it won't have more unallocated MAT funds available until 2022.

“I think it’s a great idea,” Hamilton said. “I want to build too, but this is the fun stuff. I can wait to get this stuff – when we can get this city onto some better financial footing.”

Others worried the project could become a draw for vandals, given past experience with sculptures located at the waterfront. One $100,000 sculpture is “basically sitting in a garbage can at this point” over the issue, Hamilton said.

Mayor Bill Mauro strongly objected to his council colleagues raising the money committed to the multi-use turf facility as a reason not to support other projects.

“If the multi-turf project is going to be rolled out at every council meeting as a reason why we can’t do anything else, I pretty clearly disagree with that,” he said.

Mauro countered the current council had held tax increases to a reasonable level over its two years in power, and that projections indicated municipal finances could emerge relatively unscathed from COVID-19.

Details such as design are not yet firmed up. Ch’ng said the 50th anniversary committee was leaning toward a “Thunder Bay” sign, but a “TBAY” option was also being considered. The committee was also looking to make the sign “uniquely Thunder Bay” through design options, she said.

A timeline for implementation of the project is not yet determined.