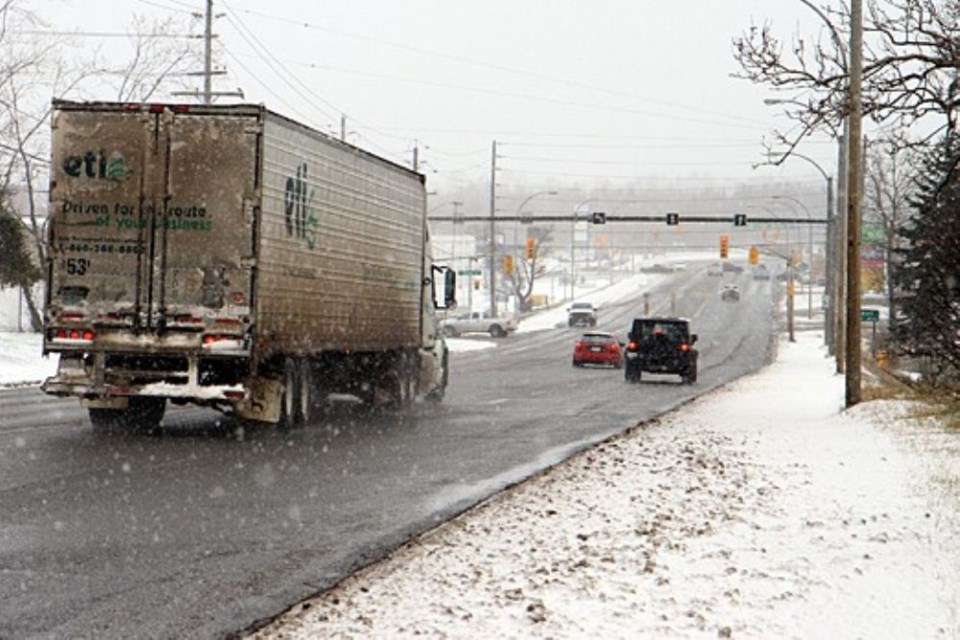 A truck drives on Dawson Road. Thunder Bay city council has further delayed a vote to implement a designated truck route that would direct transports onto the highway. (file photo)

Giertuga levelled the accusation at a Monday night council meeting, suggesting a statement by Mauro at the meeting undermined council’s decision to support a designated truck route. Council’s code of conduct prohibits councillors from “actively undermin[ing] the implementation of Council’s decisions.”

Mauro said he plans to vote against any by-law to put council’s decision on the matter into force.

“I’d like to get clarification from our legal counsel," Giertuga said. "By his worship stating ‘I won’t support this, I’ve been opposed to this all along,’ because we’ve been told this [by-law] is just a mechanism to implement council’s will - I'd like to get an interpretation on whether this is a contravention of Rule 15 in our code of conduct.”

“So the plot thickens – that’s an interesting comment by Councillor Giertuga,” Mauro responded.

The rule in question states in part: “The role of elected officials, once a council decision is made, is to support the implementation of that decision, not to work against its implementation, publicly or behind the scenes.”

However, it’s uncertain Mauro’s comment would be considered a violation. The mayor said an opinion the city received on the rule last year made it clear that councillors can freely vote and express their positions in council chambers.

In January 2019, a divided council voted 7-6 to approve in principle a designated truck route that would steer transport traffic off Dawson Road and Arthur Street, instead directing it onto the provincial highway network. Council directed administration to report back with a by-law that would put those changes into force.

A proposed by-law was brought before council in June, but failed when Coun. Brian Hamilton – who had earlier supported the truck route – voted against it, tipping the balance.

The issue has been in limbo ever since, with attempts to schedule a vote on a revised by-law put on hold over accusations of conflict of interest against Hamilton. While initially found to be in conflict by the city’s integrity commissioner, the McKellar ward councillor was later cleared after a legal review of the case.

With that issue resolved, Giertuga expressed frustration Monday that a vote on the by-law had been delayed yet again. The further delay is due to a motion passed by council requiring all 13 councillors be present for the by-law vote – something which has proven to be a scheduling impossibility so far.

Giertuga, who has championed the truck route for years at city hall, said the requirement is an unreasonable barrier to moving forward on the issue.

“We haven’t done this to my knowledge in the last 20 years that I’ve been here,” he said. “We’ve made a lot of big decisions [in that time].”

“This has been about a year [since] we passed and ratified this designated truck route. We’ve been told by administration to finalize the [by-law]… We’re looking pretty silly. I don’t think we’ve ever gone a year after passing something like this and keep pushing it off.”

Neebing councillor Cody Fraser agreed the delay was a bad look for council.

“We’ve tripped over ourselves a number of times,” Fraser said. “If I was an outsider looking in, I would be laughing.”

However, council ultimately decided to stick with the original requirement for all councillors to be present. That leaves city clerk Krista Power to canvass councillors in an attempt to find a date that works for all 13 before the end of June.

Some councillors weren’t sure that would happen, raising the possibility of further delays to the implementation of the truck route.

Accused in teen's death found fit to stand trial
Jul 3, 2020 5:04 PM
Comments
We welcome your feedback and encourage you to share your thoughts. We ask that you be respectful of others and their points of view, refrain from personal attacks and stay on topic. To learn about our commenting policies and how we moderate, please read our Community Guidelines.
The latest on COVID-19 Local and global updates →
IT'S PATIO SEASON!
Patios That Are Now Open