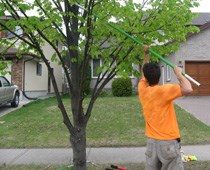 THUNDER BAY -- The City of Thunder Bay will replace thousands of trees on municipal property in the coming years as the urban forest continues to age, and more ash trees fall victim to the Emerald Ash Borer (EAB).

But with other communities also ramping up their tree replacement programs, the demand for nursery-grown trees is likely to push up prices and prompt Thunder Bay to consider other options.

This year, the city is requesting bids to supply about 400 trees, well up from the 150 to 200 that used to be planted annually.

Mike Dixon, supervisor of forestry and horticulture for the city, expects the annual requirement will eventually grow to 1,000 trees. "We really need to start putting more trees in the ground just to keep the canopy that we have," he told tbnewswatch.com.

Ash trees currently comprise about 25 per cent of the canopy. While no more of them will be planted, the city will concentrate on saving the ones most likely to survive the EAB if they are treated.

A management plan approved last year by city council includes the injection of a bio-pesticide (TreeAzin) into approximately 1700 trees. Dixon said potentially more than that number are salvageable but the process is expensive.

"We're selecting 1700 of the best specimens across the city," he said, in order to keep them present on city boulevards.

Thunder Bay's urban forest is much more than just ash trees, however, and as a whole, the canopy has reached maturity.

"It's starting to see its end-of-life. We are losing trees now because of natural mortality," Dixon noted.

In its recent outreach to suppliers, the city listed a requirement for no fewer than 34 different tree species. They range from better-known varieties such as Manitoba maple and Colorado blue spruce to less common names including Ohio buckeye and Goldspur amur chokecherry.

Dixon said they are all compatible with the plant hardiness zone that Thunder Bay is situated in (3b). "They are not necessarily native trees but they are trees that are proven to be adaptable for urban settings."

City staff generally decide which trees are suitable for planting in which location, but homeowners can also request that a tree be placed on the boulevard near their property.

Under the Tree Stewardship program, residents contribute one-third of the cost, and a tree can be put in the ground the next planting season. Otherwise, requests are put on a wait list and may take two years to accommodate.

Dixon is unsure at this point how much the city will have to pay for this year's planting program, but it's likely that costs will increase.

"Unfortunately, that little green bug is going to drive the price up. Winnipeg has, I believe, 350,000 ash trees. Our suppliers in Manitoba have let us know that their supplies of trees have all of a sudden been spoken for, so we're going to have to go further afield."

Dixon said the city may have to consider alternatives such as bringing in smaller trees to plant in parks rather than boulevards, or possibly growing its own trees at the Centennial Botanical Conservatory.