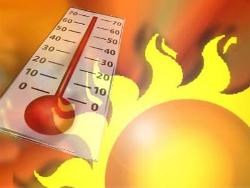 THUNDER BAY — In the middle of Thunder Bay's long, cold winter, if you had planned your summer vacation to start this week, chances are good that you would have chosen the warmest days of the year.

Environment Canada's decades of record-keeping show that Thunder Bay, on average, experiences its highest temperatures on July 25, 26 and 27.

Over those three days, the temperature typically tops out at 24.8 C before starting a long, slow decline toward fall and winter.

As meteorologist Gerald Cheng notes jokingly, after the climatological peak that starts Thursday, "it's all downhill."

Cheng cautioned that despite what the long-term records indicate, there's plenty of room for significant temperature fluctuations from summer to summer.

After the current stretch of above-average temperatures, Environment Canada's medium-term outlook for Thunder Bay calls for temperatures to fall slightly below normal next week.

Meantime, city residents planning next winter's getaway may want to consider Jan. 16 to 20.

According to Cheng, over those four days Thunder Bay typically experiences its coldest weather of the year, with an average minimum of -21.4 C.