Organization also announces Northwest Lines will do the work in-kind to install the colourful crosswalks at two Thunder Bay intersections.
Jan 10, 2020 8:32 AM By: Leith Dunick 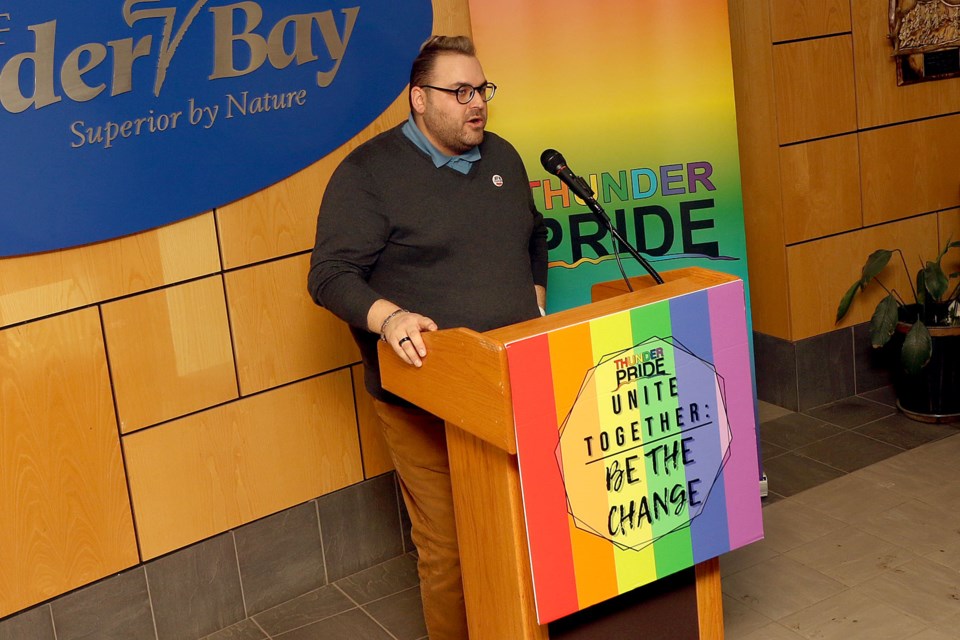 Thunder Pride chair Jason Veltri on Thursday, Jan. 9, 2020 announces the organization has collected $10,000 to cover its one-third share of the cost of planned rainbow crosswalks at Bay and Algoma streets in Thunder Bay. (Leith Dunick, tbnewswatch.com)

THUNDER BAY – Despite some online threats to vandalize or destroy it, the city’s first rainbow and transgender crosswalks is as popular an idea as ever – and two steps closer to reality.

On Thursday, Thunder Pride’s Jason Veltri announced not only has his organization raised $10,000 toward the project, Northwest Lines, the company hired to install the colourful crosswalks, has agreed to waive its fee.

City council, who unanimously agreed to help fund the project, is expected to rubber-stamp its $9,333 one-third share of the overall cost during upcoming budget deliberations.

“It really does show that we’re moving in the right direction. We’re creating meaningful partnerships to create these types of projects in the city and having their support means the world,” Veltri said.

The donations came from more than 100 donors and, combined with Northwest Line’s in-kind donation, show widespread support for the project, Veltri said.

“Social media today is a vile place. People feel empowered to make these comments, but what we see is there is a majority of people out there who don’t engage with that and they speak with their fundraising and their help with supporting this project.

“We just need to stay steadfast in our resolve that we are doing the right thing and that the majority of our community is with us.”

It’s about creating a welcoming community, said Northwood Coun. Shelby Ch’ng, who along with Neebing Coun. Cody Fraser, was instrumental in bringing the rainbow crosswalk idea to council’s attention.

Ch’ng said it’s small steps like these that send a signal to people that it’s a city that welcomes everyone.

“And we have a history of that, not only in Thunder Bay, but across Canada and the world. The mindsets are shifting now and I think this is an important milestone for any Pride organization to have a crosswalk and to really demonstrate that this is an inclusive, welcoming space.”

One rainbow and one transgender crosswalk will be installed at the intersection of Bay and Algoma streets. A second rainbow crosswalk is planned for the intersection at May and Donald streets in support of the city’s LGBTIQS+ communities.