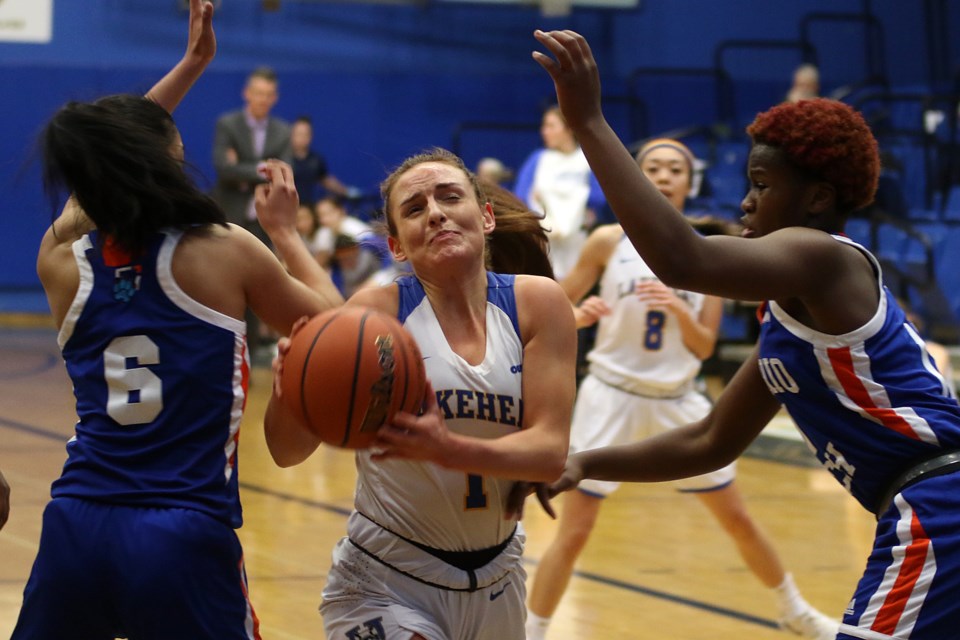 THUNDER BAY – At one point this season, the Lakehead Thunderwolves women’s basketball team was 1-9 and headed nowhere.

That was then, and this is now.

The Wolves on Friday, led by a 25-point, 14-rebound effort by all-star guard Sofia Lluch, broke free of a pesky one-win expansion UOIT Ridgebacks team in the second half at the C.J. Sanders Fieldhouse and walked into the playoffs the proper way – with an 82-53 win.

Who they’ll play remains to be seen, but for now, just getting there will have to do.

“We knew coming in that we had to come in with energy. We had a rough first half, but in the locker room we knew we needed to bring that energy in the second half,” said fourth-year guard Nikki Ylagan, who found her scoring groove after the break and finished with 21.

“Our playoff lives kind of depended on that. We wanted to go in there and prove ourselves and get ready for playoffs.”

Lluch, who’s been averaging just over 20 points a game since Christmas, said it feels good to get the job done.

“It feels amazing to have this opportunity to add more games to our season,” the second-year star-in-the-making said.

“It’s always nice to keep playing and pushing and just keep improving as a team.”

The Thunderwolves jumped in front 14-10 after one quarter, Lluch responsible for all but four of the points.

But after she hit a shot in the second that gave LU a 23-12 advantage, things slowly started to fall apart and the Ridgebacks scored the final seven points of the half, including a three by Christine Yogaretham, and the home side could only cling to a one-point, 27-26 advantage when the buzzer sounded.

Coach Jon Kreiner said he told his team at halftime he wanted to get in on their own merit and not worry about what Algoma, the lone team that could catch them for 12th, was doing.

“I told the girls I’d rather get in without having to check the scoreboard. If we win the game, we’re in and we can feel good about it and carry our string of really good basketball play – except for one we threw in the trash can against Windsor – and probably the first half tonight, but we had a great second half tonight.”

The Thunderwolves outscored the Ridgebacks 55-27 over the final 20 minutes thanks in part to a 15-2 run to open the third, Ylagan chipping in 16.

But more importantly, the team started to spread its offence around, where in the opening quarter only Lluch, Ylagan and Megan Looney found the net.

“We’re going to play no less than a five seed, so when we play those teams they’re going to load in on Sofia, whose been our best player and our leading scorer since Nov. 29. If other kids aren’t stepping up, we’re going to be in tough to even get 40 points,” Kreiner said.

Looney had six off the bench, while Kate McPhail chipped in seven and Claire Wierserma finished with six points and an equal number of rebounds.

The Wolves close out regular season play on Saturday night at home against Queen’s. Tip-off is 6 p.m. Graduating seniors from both the men's and women's teams will be honoured at halftime.

North Stars score four in third to knock off Miners
Feb 28, 2020 10:46 PM
Comments
We welcome your feedback and encourage you to share your thoughts on this story. We ask that you be respectful of others and their points of view, refrain from personal attacks and stay on topic. To learn about our commenting policies and how we moderate, please read our Community Guidelines.