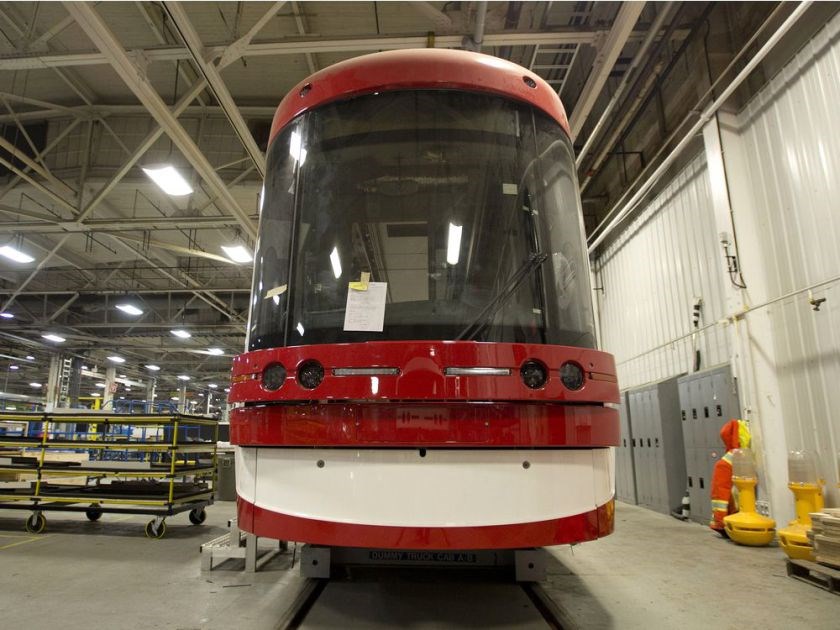 TORONTO — The Toronto Transit Commission and Bombardier Transportation both deny a media report that the streetcars built in Thunder Bay are nowhere near as reliable as the TTC says they are.

A story in the Toronto Star this week also caught the head of the largest union at the plant off guard.

It stated that the new streetcars have experienced 72 per cent more instances of service delays than the TTC has disclosed publicly.

The TTC, the report said, releases one set of statistics that indicate the vehicles are performing well, but keeps under wraps another set of data showing far more operating issues.

Dominic Pasqualino, the president of Unifor Local 1075, told Tbnewswatch "I thought everything was good."

In a statement Wednesday, Bombardier condemned the newspaper's allegation "in the harshest terms," calling the story erroneous and misleading.

The company said the TTC records all types of incidents (vehicle, systems, infrastructure, weather, passenger, maintenance, accidents etc.) for tracking purposes, but "the entirety of the TTC service delay numbers are not all attributable to Bombardier."

The statement said it's important not to confuse two different sets of metrics.

It cited the example of a passenger holding a door and causing a service delay as something that would not be connected to Bombardier performance metrics.

According to the company, the same can be said about a car crashing into a streetcar causing damage or delays.

Bombardier said that during joint meetings between the company and the TTC, all service interruptions are analysed under a strict methodology which is also used to calculate the reliability of the streetcars.

These are the metrics, it said, which are compiled by the TTC and made public at its board meetings.

The Toronto Transit Commission said it continues to report the same industry-established Key Performance Indicator it has used for several years.

"We log and record all instances of mechanical failure and defect," it said in a statement.

The TTC said it is generally satisfied with the performance of the Bombardier streetcars, but added "As with any major vehicle procurement, there are growing pains and we continue to work collaboratively with Bombardier to address issues as they arise."

The company said it's making "steady progress" in improving reliability, noting that in July and August it exceeded the reliability threshold required by its contract with the TTC.

It said that at a TTC board meeting last week, the head of the commission described the streetcars as performing extremely well.

Pasqualino said "Everything I'd heard was that everyone was happy" with the streetcars, including the TTC and Bombardier management.

He also said the company seems to be on track to meet its contractual requirement to deliver 204 cars to Toronto by the end of the year.

Bombardier still hopes to win an additional order for 60 streetcars, but the TTC says it has made no decisions related to that, and has no capital financing to place another order in any case.

With their biggest contract winding down, 550 workers at the Thunder Bay plant are scheduled to be laid off next month.