On the eve of a planned presentation to council by the company planning to erect 18 wind turbines on the Nor’Wester Mountain range, its opponents called it a potential financial disaster for the city.
Apr 13, 2010 1:08 AM By: Leith Dunick 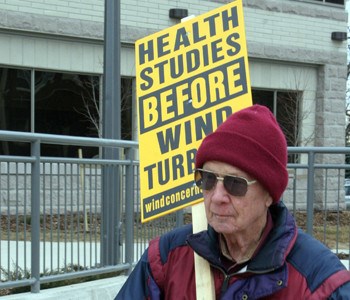 About a dozen protestors picketed city hall on Monday, opposing a planned wind farm on the Nor'Wester Mountain Range. (Leith Dunick)
On the eve of a planned presentation to council by the company planning to erect 18 wind turbines on the Nor’Wester Mountain range, its opponents called it a potential financial disaster for the city.

Irene Bond, a vocal member of the Nor’Wester Mountain Escarpment Protection Committee, on Monday asked council to consider one of three alternatives before allowing Horizon Wind to proceed with the $75-million project.

First and foremost she prefers the city pull out of a lease signed earlier this year with Horizon that will provide the city about $80,000 a year over 25 years. The city says it will earn between $200,000 and $300,000 annually.

If that’s not an option, she wants the city to wait until an independent study on the impact of the power-generating turbines have on people regularly exposed to the 40-storey structures, or set in place a policy to indemnify individual citizens and establish a fund to pay residents who suffer lower property values as a result.

“This is city land. The city has control of this land until the bulldozers roll in. It’s not too late,” said Bond, a nearby resident whose husband Ward Bond owns the adjacent Loch Lomond Ski Area.

Bond, who made her presentation a day earlier than a dozen or so other deputations because she was unavailable to speak at Tuesday’s special session of council, said the financial gains being realized by the city are far outweighed by the negative impacts of the development.
“In exchange for a meagre $80,000, we will sacrifice one of the most beautiful views of the region,” she said.

On Friday, Horizon president and CEO Anthony Zwig announced the company was bowing to public pressure and moving six of its planned turbines back 500 metres, setting up a minimum 500-metre buffer zone between the structures and the nearest houses. He said the company, already taking a multi-million dollar hit to make the concessions, can’t afford to make any more changes.

The move was immediately condemned by the opposition, who said health and safety are a minor part of their stance.

Bond said a lack of public consultation on the decision to sign away 17,000 acres of pristine city property, the refusal to open up the project to other bidders and a series of closed-door sessions have cloaked the project in a veil of secrecy.

“Few know what it is we are about to give away,” she said, with a display of towering structures Photo-shopped onto a picture of the Nor’Westers projected onto a giant screen on the back wall in city council chambers. “Why can southern Ontario protect the Niagara Escarpment from wind turbines when we cannot?”

Coun. Aldo Ruberto played devil’s advocate, asking Bond if she had an ulterior motive for wanting the project halted.

“What is your response to the public who say this is a not-in-my-backyard approach?” Ruberto asked.

Engineer Karl Piirik, who presented to council with Bond and 20 years experience in the electrical industry, provided the answer, saying the city can’t afford to take a major risk like this without considering the end result.

He urged the city to use prudence over the desire to make a quick and easy buck.
“It’s a little hard to prove in terms of what will happen. We don’t even know what has been proposed (by Horizon). We really haven’t seen anything, and to my knowledge, neither have you,” Piirik said.

Council limited its questions, holding the session to 22 minutes.