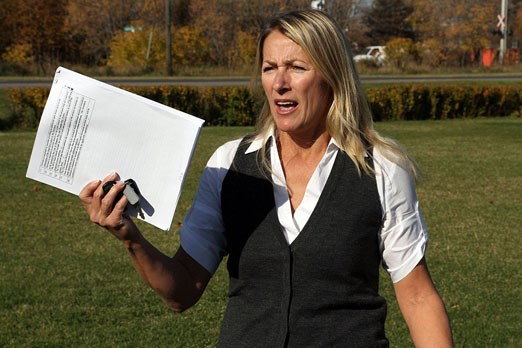 Horizon made a statement on Friday that said the company continues to work with council and that its findings on the project have always been accurate and verifiable. (Leith Dunick, tbnewswatch.com)
Irene Bond isn’t surprised that municipal administration has recommended city council approve Horizon Wind’s application to build an 18-turbine wind farm on city property.

Bond, spokeswoman for the Nor’Wester Mountain Escarpment Protection Committee, said her group will make one last plea to council on Tuesday night, trying to convince them to vote down the lease and location agreement ahead of an expected vote at special Committtee of the Whole meeting later that night.

"We hope to have a second sober thought here and provide that so that councillors can reconsider," said Bond, a day after the city released a 12-page report outlining its position on the project, while at the same acknowledging the threat of lawsuits from "several parties" and stressing the decision is in no way being rushed through in advance of the Oct. 25 municipal election.

Bond isn’t holding her breath that they’ll be able to sway anyone to change their vote, though she hasn’t given up entirely.

Neebing Coun. Linda Rydholm is expected to vote against the project, while outgoing McKellar Coun. Robert Tuchenhagen told Dougall Media on Friday he will vote in favour of it on Tuesday.

"I expect to support the wind farm," Tuchenhagen wrote in an email, when asked how he plans to vote.

Coun. Aldo Ruberto said he has yet to make up his mind.

"I will wait until Tuesday to decide," he shared via email. "I’m going over the report in fine detail to see if I’ve missed anything."

At large Coun. Iain Angus said he too will wait for Tuesday to make a decision.

The rest of council, with the exception of at-large Coun. Larry Hebert, was also polled, but none immediately responded Friday afternoon.

Hebert will declare a conflict, as he is involved with an energy consulting firm.

Bond said if not this council, perhaps the next might reconsider, an option left open to council on any decision it makes.

"It frightens me that we’re allowing administration, the same people who got us into this, to continue with this. You don’t make a bad decision and then keep making bad decisions. Let another group see this and investigate it and go from there."

The public report, produced in three days by city after council asked for it on Monday night, outlines a lease agreement for 18 turbines, with provisions for a dozen more at a later date. The reports suggests council should consider capping the number and size of the turbines and provides the city security that Horizon will set aside money to cover the decommissioning costs when the turbines’ lifespan is reached.

In her report Evans says administration doesn’t feel the approval has been rushed, as opponents claim, stating the first request by Horizon for approval was in March and the lease format request followed two months later.

"These matters have been considered by Committee of the Whole on several occasions," Evans writes. "It is administration’s opinion that all information relevant and necessary to the decision-making process has been obtained and thoroughly and properly reviewed."

Bond, however, suggested Horizon has not responded to 16 comments made by the city in relation to the company’s provincially mandated renewable energy approval, which has yet to be filed with the ministry of natural resources and without which the project cannot go ahead under the Green Energy Act.

City manager Tim Commisso encouraged the public to take time to read the entire 12-page report, and said by no means is it a done deal, even if council follows administration’s recommendation and votes to lease the land to Horizon and approve the turbine locations.

"(The report) acknowledges that there are a number of other requirements really for this project to move forward and we’ve outlined those in the report – certainly the REA approval and things like First Nations consultation."

Council on Tuesday will receive a report in closed session from Dillon Consulting outlining the full economic impact of potentially relocating some of the turbines.

"That report will be confidential because it contains commercially sensitive information," Commisso said.

Commisso would not comment when asked if Horizon has a lawsuit filed or ready to file a breach of contract suit should city council vote no.

A source close to the Nor’Wester Mountain Escarpment Protection Committee told Dougall Media on Friday he expects the opposition group will have a lawyer hired by day’s end and a lawsuit would more than likely be forthcoming if the wind farm is allowed to go ahead.

A breach of contract lawsuit, if lost, would be paid out of the city treasury, not through insurance.
Neebing Ward residents have cited diminished property values, health issues and peril to endangered species as reasons for opposing the project.

The project, when first unveiled to council in 2007, had the turbines located south of Big Thunder Sports Park, but when the province turned down the site, the two sides agreed on the current placement.