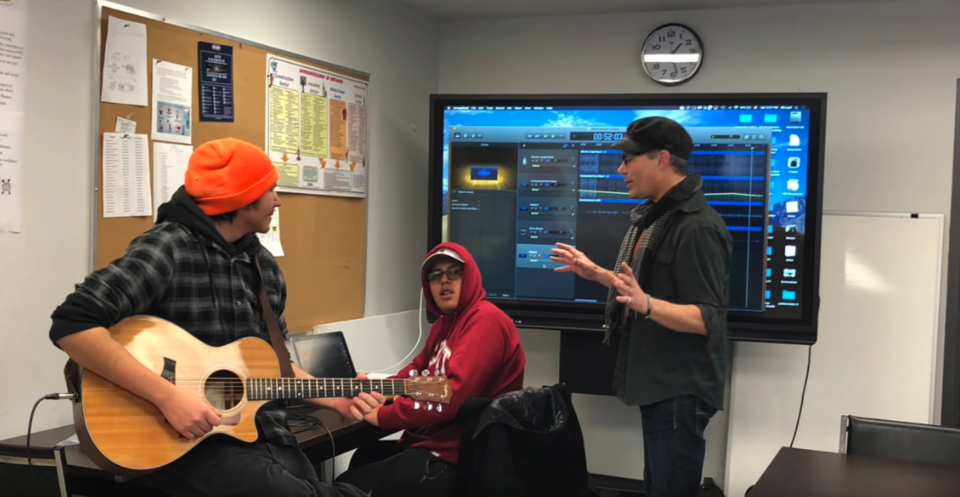 Under the guidance of B.C. producer Rik Leaf, the group wrote and performed an original song and created an inspirational video called Gotta Wake Up (Make Our Dreams Our Reality).

It was posted last week to Tribe of One's Facebook page.

Tribe of One describes itself as a national collective of artists & entrepreneurs who provide creative development programs that empower youth.

The Pic Mobert students spent the better part of a weekend with Leaf learning to use the video equipment, recording gear, and editing & graphic design programs necessary to produce all the elements of the video.

The video includes a number of photos she took as co-producer as the group moved around the First Nation during filming.

Simpson said the response to the production has been overwhelming.

"People tell me how amazing it is. All the comments on Facebook are very positive."

Student Roland Bigthroat saw it as an opportunity to have some fun and learn at the same time.

He's not sure how far his performing skills might take him in the future, but expects it will just remain a hobby for now.

"Doing this, getting out and seeing other people with different talents actually inspired me to play the guitar more than I was originally playing. Other kids should do this more often, too," Bigthroat added.

Rik Leaf, in a phone interview from his base in B.C., told Tbnewswatch he's proud of the youths who participated in the project.

"I asked a lot of them. Creative stuff is scary to do in front of people," he said.

Leaf said there was virtually no budget for the production, so he told the students "It's gonna have to be you. I put the whole idea of telling the story in this video to them."

He said the group talked openly, as they toured the community and recorded, about the positives and negatives of life in Pic Mobert.

"They were really balancing what they have, and the challenges...I was just really proud of them for the risks they took, and I'm glad the community obviously values them doing something that's positive and hopeful."

As of Dec. 5, Leaf said, their music video had received 3,800 views on Facebook.