NHL star says the Oliver Paipoonge rink was always cold, but it's where he got his start in hockey, so he's hoping his support can help put the Kam River Fighting Walleye's bid over the top.
Feb 13, 2021 4:57 PM By: Leith Dunick 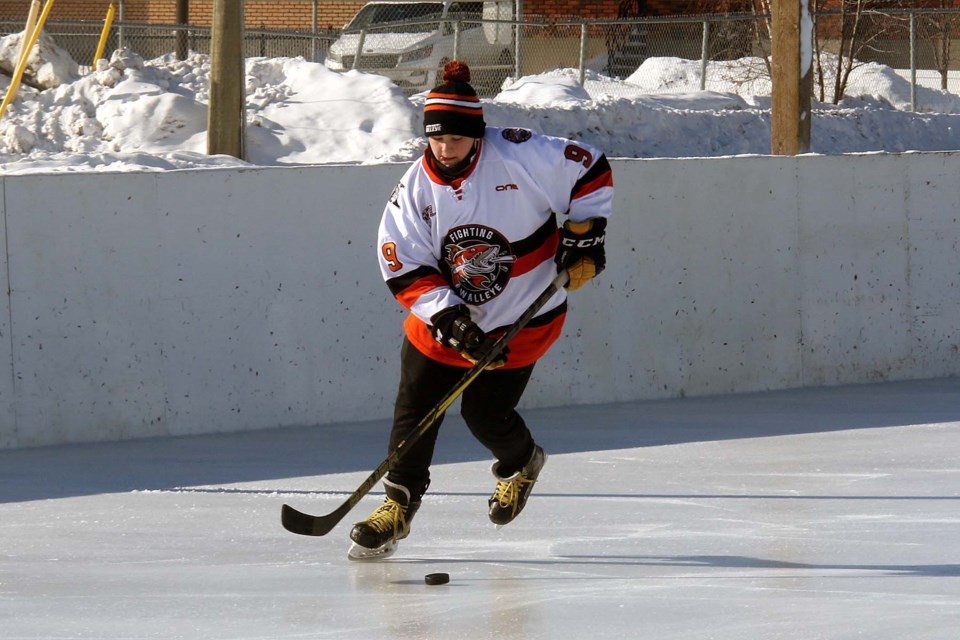 The Kam River Fighting Walleye have until Sunday night to make the cut in the 2021 Kraft Hockeyville contest. (Leith Dunick, tbnewswatch.com)

His name, along with those of his younger brothers, Marc, Jordan and Jared, is permanently affixed to the outside of the Oliver Paipoonge, Ont. rink, on a slightly faded sign that reminds the local hockey community it was two decades or more since he last regularly skated there.

Needless to say, the old barn could use a little tender loving care.

Staal, a forward in his first season with the Buffalo Sabres, is doing his best to help the cause, trying to turn up the heat (literally) and help boost the Kam River Fighting Walleye's bid to win the $250,000 Kraft Hockeyville contest to make improvements to Staal's old stomping grounds.

The 35-year-old shared fond memories of playing at the NorWest Arena in a video produced to help win over contest organizers.

“I think I was five years old and I remember it being really cold,” Staal said., adding the temperature did help keep the ice fast.

“The arena was cold, the dressing room was cold. I just remember stepping on the ice for the first time there. I couldn't really skate. I more or less walked and tiptoed all the way across to the players' benches.”

Staal described Oliver Paipoonge and Thunder Bay as a blue-collar town, a place where people work hard and play equally as tough – but with a heart of gold.

“People are passionate about sports, especially hockey,” Staal said. “I think it's a place where everyone who has grown up there has had nothing but positive things to say. It's a community-type feel. It's a place that you're rooting for, not only for your own family and your own kids, but you're rooting for the kid down the street, the kid you grew up with in high school or elementary school.”

The rink could use some upgrades, he said, drawing upon his childhood memories.

“It's a great rink, but like anything, with time, you want to keep it as part of the community for a long time,” he said. “If they were to get it, it would definitely go a long way.”

The Fighting Walleye didn't let a little cold weather stop them on Saturday from trying to drum up support at the city's many outdoor arenas.

Coach Matt Valley and other team officials toured the rinks, bringing along some prizes and mascot Chomper to hang out with the kids who braved the cold to skate.

Valley said winning the Kraft Hockeyville title would mean a lot to the community of Oliver Paipoonge, being able to make the necessary upgrade to the rink, which the Fighting Walleye have adopted as their new home in joining the Superior International Junior Hockey League as an expansion team in 2020-21.

“It's not just for us, or even for the NorWest (Arena). It's for everyone that uses it," Valley said.

Win or lose, it's been a great experience putting together the contests entry, which has seen more than 250 people sign up and offer words of support behind the bid.

“It's been pretty sweet to be a part of it,” Valley said. “We went out to Rosslyn today and it was -35 and everyone was out there supporting it, happy to see Chomper and the (team) bus, just really trying to get on board here and push us over the top.”

Nominations for the annual contest close on Sunday, when four nationwide finalists will be chosen. To post a story, picture or comment in support of the NorWest Arena entry, visit www.krafthockeyville.ca. The goal is to get 1,000 people to support the effort.