A seven-year-old boxer is expected to make a full recovery after being attacked by several wolves outside city limits. Tyler Allen took his boxer, Marshal, out for a walk in the field behind his house, which is near Kakabeka and Stanley, on Sunday.
May 27, 2013 5:12 PM By: Jeff Labine 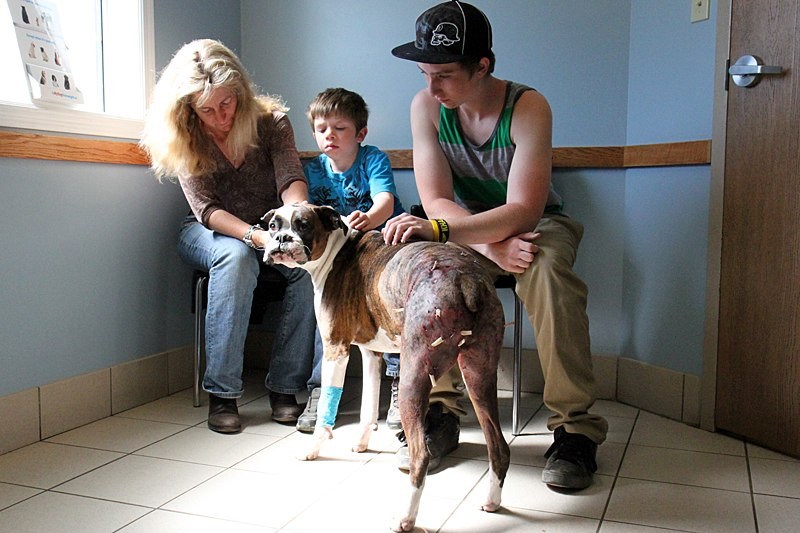 (from left) Jody, Jamie and Tyler Allen comfort their boxer on May 27, 2013. (Jeff Labine, tbnewswatch.com)

A seven-year-old boxer is expected to make a full recovery after being attacked by several wolves outside city limits.

Tyler Allen took his boxer, Marshal, out for a walk in the field behind his house, which is near Kakabeka and Stanley, on Sunday.  The 16-year-old took Marshal off leash and let him run off ahead. He lay down to enjoy the sunny day when he said he heard a noise.

“I came over the hill and there were five wolves surrounding him and another three or four up on the hill,” he said.

“I grabbed a nearby stick. The biggest one was maybe 20 feet away from me and he started walking towards me. He got pretty close to me and I swung at him. He then decided to turn around. I didn’t really think much at first. I just kind of did it. After it happened, it kind of set in and started to sink in. I’m a little uneasy.”

Tyler said Marshal was able to run back to him once he chased off the wolves. He ran down the road towards the highway carrying Marshal on his shoulders. He put his dog down and tried to flag someone down for help but wasn’t able to immediately.

He said he understands as he was covered in blood.

Tyler eventually made it back home and was able to take his dog to the veterinarian.

He said it was hard to see his dog hurt like that.

“Marshal is really close to me,” he said. “I just wanted to help him.”

This wasn’t the first time the Allen family spotted wolves in their neck of the woods.

Tyler mentioned he saw a group of wolves in the same area about a month ago.

A year before that, Tyler’s mother, Jody Allen, said she saw a wolf.

But despite the frequent spotting of the animals, Allen believes the wolves still have a respect for people as they backed away once her son confronted them.

Diane Maki, a veterinarian at the Northwestern Veterinary Hospital who treated Marshal, said the dog received many punctures and lacerations to his rear near his hind legs. She expects the dog will make a full recovery.

She said it’s rare that a dog survives a wolf attack and makes it to a vet clinic.

“He’s making a very speedy recovery,” she said. “The dog is very fortunate not to have any abdominal puncture wounds. Usually when a wolf attacks a dog or a cat they aren’t going to make it. They don’t make it to the clinic or aren’t even found by their owners.”

With more than 30 years of experience, this was the first time Maki treated a dog after being attacked by a wolf. She often treats animals that have had a run in with foxes or beavers, she added.

The dog is expected to return to his family Tuesday.