Former University of Massachusett-Amherst goaltender says he rushed himself back after getting hit in 2015, risking his health and safety for the love of the game.
0
Sep 23, 2019 1:55 PM By: Leith Dunick 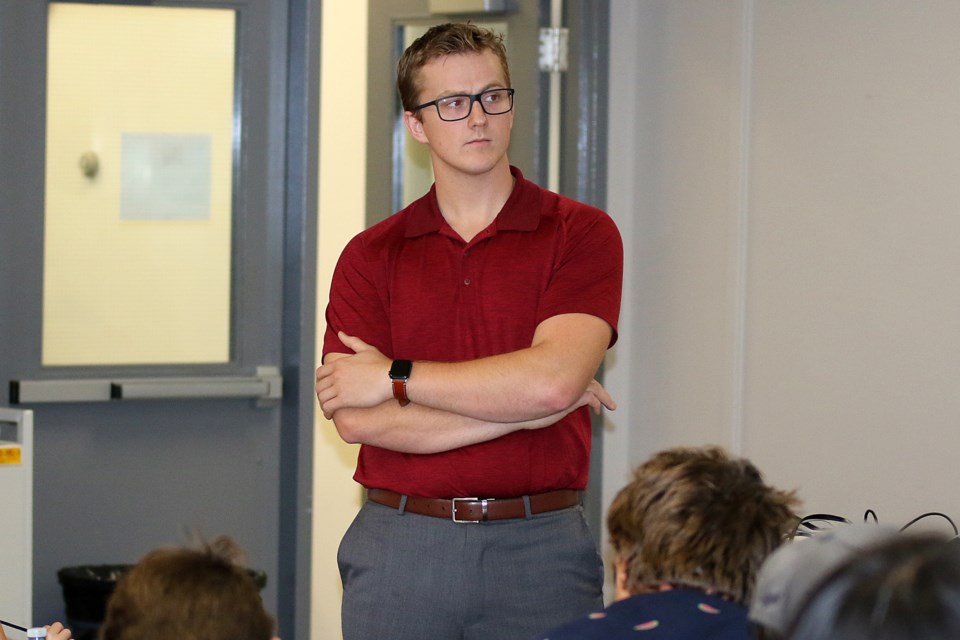 Lakehead Thunderwolves goaltender Nic Renyard has suffered several concussions playing hockey, but after the latest, refused to rush himself back between the pipes. (Leith Dunick, tbnewswatch.com)

THUNDER BAY – Growing up, Nic Renyard was like most Canadian kids.

He’d get hit playing hockey, then got back up, brushed the ice off his pads, shook the cobwebs out of his brain and jumped back between the pipes.

With an eye on a possible National Hockey League future, the Victoria, B.C. goaltender wasn’t going to let a shot to the head keep him out of action.

And it wasn’t necessarily his coaches and teammates pushing him to play.

He put that pressure squarely on his own shoulders.

Little did he know he might be playing Russian Roulette with his future.

Renyard, set to enter his final season with the Lakehead Thunderwolves, was quick to dismiss concussion symptoms – until they were too severe to ignore.

“The mindset back then was just to get you back into the net, it didn’t matter. You bumped your head, you’re a kid get back to it, no problem,” Renyard said on Monday, addressing a group of students learning to be peer leaders at their school ahead of Rowan’s Law Day, named after Ontario high school rugby player Rowan Stringer, who in 2013 died after suffering three concussions over a six-day span.

Her death led to new legislation in the province centred around concussions, recognizing the risk and taking action.

Renyard, who began his college career at the University of Massachusetts-Amherst, first realized something was wrong in his rookie NCAA season.

“I was playing almost every single game and all I cared about was hockey, being the best goalie I could be and maybe signing an NHL contract. That was kind of where my head was at. At Christmas of that year, I was hurt in practice. A player skated as fast as he could into me and hammered me. It knocked me over,” he said.

“I got up, shook my head off and tried to focus again. I couldn’t really see the puck that well, but we had a big game that weekend against a rival, so I had to play, it didn’t matter.”

The rest of the week, leading up to the big game, he practised horribly, couldn’t sleep and then, not surprisingly, was lit up by the opponent.

“I thought it was just an off game. I got hit in the game again and woke up the next morning with pretty bad headache and realized it was an actual problem I had to go take care of,” Renyard said.

It took him until March or April of the following year to feel normal again.

He only played two seasons at Massachusetts, before returning to Canada in 2017-18 to play for the Thunderwolves.

Once again, he had his bell rung, again at Christmastime.

This time, however, he had the proper supports around him, thanks in part to the concussion clinic located at Lakehead University.

“We set up a protocol to help me get better. It started very slowly in the beginning for school and working out –very simple on the bike, very simple in class,” Renyard said.

Dave McKee, who runs the concussion clinic said he’s doing his best to make the public aware of the symptoms of concussions and the dangers of not having them treated.

“We sure want the kids to be aware if any of their teammates have concussion to team up, speak up, and to help out their friends and members of the team,” McKee said.

Recognition of what a concussion is, reporting, recovery and rehabilitation are all important factors along the concussion path, he added.

“It’s also understanding it’s not good to go back in and play with a concussion.”

Rowan’ Law Day is celebrated on the last Wednesday in September each year.