The road to a national men’s university hockey championship rolls through Alberta. The No.
Mar 27, 2010 9:42 PM By: Leith Dunick 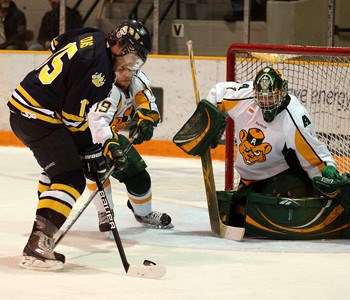 The No. 1 seed Alberta Golden Bears on Saturday night crushed the hometown crowd’s dreams of a Lakehead-Saint Mary’s CIS final, a four power-play goal performance stamping out the No. 4 Thunderwolves 5-3 at Fort William Gardens. Instead they earned the championship berth for themselves and on Sunday will take aim at their 14th national crown in an East versus West title game.

The storybook finish for the Thunderwolves at the Cavendish University Cup was not to be, said graduating forward Dan Speer, who finished his Lakehead hockey career on a losing note, the third time in three CIS championship appearances he’s come up short.

“No definitely not,” said Speer, when asked if it was the way he envisioned the end of his T-Wolves tenure.

“We took it to them, but we just didn’t get the bounces like we did last night against UQTR. If you leave the score tight and give (Alberta) the opportunity to score, they’re going to.

"Their power play was extremely good tonight and I think that’s what ultimately killed us.”

Canada West MVP Chad Klassen scored a pair of power play goals, including an insurance marker midway through the third, to pace the Golden Bears. Klassen was doubtful heading into the tournament, the victim of a concussion-causing hit in his league final.

The two goals more than made up for the headaches.

“It was really nice. I was probably the happiest guy in the building to get a couple of goals tonight coming off the concussion. I was a little worried, a little tentative in the first game maybe. I finally got my legs going and should be good to go rock tomorrow night,” Klassen said.

Ryan Baird made early believers of the Thunderwolves faithful, pinching in from his perch on the blueline at the 2:58 mark after Speer worked the puck in deep. Baird pounced on juicy rebound and whipped it past Travis Yonkman in the Alberta net, sending the crowd of 3,036 into a frenzy.

But as disciplined as the hosts were on Friday night in a 7-2 win over UQTR, they found themselves parading to the box and on the heels of their skates, despite a start that saw them record nine of the first 10 shots.

“I thought we had a great first period, especially the first 10 minutes. I thought we picked up right where we left off yesterday. We got the one power play goal to start things off well, we had a lot of energy. But we took some penalties, we lost our composure and it drained us a little bit of our energy, which we never really regained,” said Scherban, who nonetheless added he thought his team should have owned the lead after 20 minutes.

The penalties cost them dearly before the first period ended.

With Jordan Smith serving time for hooking, and 35 seconds to go in his penalty, Mark Soares was nailed for tripping, giving Alberta a brief two-man advantage.

It was all they’d need to tie the score.

“We didn’t have the best start in the first 10 (minutes), but we were able to weather the storm. Yonks (goalie Travis Yonkman) made some big saves down the road and luckily we were able to pull out the win,” Klassen said.

Dupuis was bombarded for the rest of the period and held his own, but early in the second, this time with Andy Zulyniak locked away, Klassen burst down the right side and blasted a slapshot that went far side on Dupuis and gave the Golden Bears a 2-1 lead.

The Wolves weathered the blistering Alberta attack and made good on the power play when Brock McPherson, hovering in the slot, took a Scott Dobben pass from the corner and let it fly, evening the score.

But the lead wouldn’t last long. In a period the where the Wolves were out-shot 21-5, it was only a matter of time before the Golden Bears struck again.

Once again, it was with the man advantage. It also proved to be a momentum killer, defenceman Kyle Fecho letting loose a slapshot from the point that appeared to change directions as it went past Dupuis with eight ticks left on the second period clock.

“It was huge I think. It was definitely a momentum changer for us. Things weren’t going so great for us in the first, like I said, but anytime you can get a goal right before the period ends, it’s a nice feeling to go into the dressing room and start from scratch,” Klassen said.

Speer deflected suggestions the goal was the end of the line for the Wolves, who looked sluggish after the great start.

“It’s unfortunate they scored a goal there,” said Speer, praising his team’s season-long effort on the penalty kill. “I don’t think at the time we were too concerned about it. We just had to come out and bury a quick goal, but unfortunately we weren’t able to do that early in the third period.”

Klassen and Ian McDonald extended the lead to 5-2 in the third, before McPherson responded with less than five minutes to go in regulation to pull the Wolves to within two.

Senior Shandor Alphonso said he was saddened to be leaving on a losing note, but he's confident the Wolves will be back, though he won't be there to enjoy it first hand.

“The future is bright,” he said.

Alberta and Saint Mary's will play for the University Cup title on Sunday at 7 p.m. The Golden Bears last won the tournament in 2008.