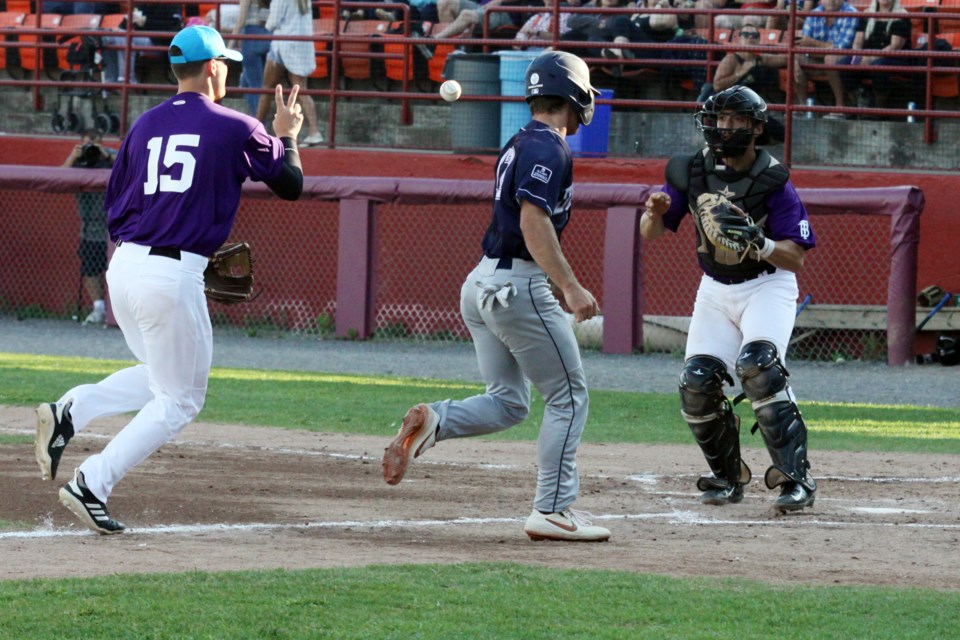 Mired in a struggling stretch where the team dropped seven of their first eight second-half contests, the Border Cats’ uphill climb to put themselves in contention to fight for a postseason spot took another hit with a 10-1 blowout home defeat to the Duluth Huskies on Thursday night.

With the outcome already long decided, the game came to an end with the final out an embodiment of the club’s current slide. Speedy outfielder Nick Seamons, who carried a .157 batting average into the game, laced a ball into the gap and appeared to have a stand-up triple but was tagged out after he missed the first base bag.

“You can’t even explain that. You’re just like, ‘Alright, this is where we’re at.’ It’s a perfect storm right now of everything good on the other side and everything bad on our side,” Border Cats manager Eric Vasquez said.

“Somebody’s got to dig their heels in and go look, 'We have to stop this.' It’s the artery bleeding, I don’t even know what you want to call it anymore. Get the tourniquet out.”

The home side quickly found themselves down 6-0 after the first two innings, staring at a pair of unexpected crooked numbers on the board at the expense of All-Star starting pitcher Joe Moran, who entered the affair with a sparkling 1.42 earned run average and a zero in the loss column.

The Huskies, who collected plenty of frequent flyer miles on their first night north of the border with 17 hits, smacked three first inning doubles, cashing in a pair of early runs.

Duluth doubled that output one frame later, though Moran wasn’t helped by his defence, which committed the second two of the night's trio of errors in the stanza.

That was more than enough run support for Huskies hurler Ryan Reynoso, who punched out nine Border Cats batters over his six innings of work, before finally having his goose egg cracked by a Jordan Larson run-scoring single.

The victory is the second in a row for Duluth (5-4), a squad that now finds itself in the thick of the second half Great Plains East Division hunt after a horrendous 13-23 first half that was the worst mark in the 22-team circuit.

Huskies skipper Marcus Pointer, whose team found itself on the wrong side of a 21-0 scoreline in that first half to sum up their early season miscues, is grateful for the opportunity to have a second-half refresh.

“It’s one of the nice things about this league, to start 0-0 in the second half,” Pointer said. “All the guys here, they’ve believed the whole summer and it’s nice to see these pieces fall in the right place.”

Vasquez said the remaining three games prior to the league’s three-day midseason break are vital for the team to be able to knock on the door of contention down the stretch, acknowledging it will be hard to get any closer if the squad falls further back. Following an 0-7 start to the first half, the Border Cats played .500 ball over the following 28 games but were already in too deep of a hole.

“It’s a great time to get a couple of wins under our belts and get momentum going into the All-Star break, giving their bodies a break and then come back and go, ‘OK, let’s restart this,’” Vasquez said.

“It’s very important and we’ve been stressing a lot of that. (Friday) and the next couple of days, it’s playoff baseball. It’s either you win or go home type of deal. It has to be that mentality.”

Claw marks: The announced attendance was 1,086…The Cats wore throwback Thunder Bay Whiskey Jacks uniforms, paying homage to the former Northern League ballclub that called the Lakehead home between 1993 and 1998…Cats infielder Karsten Vasquez, son of the club’s manager, is expected to return from injury this weekend…Right-hander Austin Brezeale (2-2, 4.18 ERA) is scheduled to start for the Cats on Friday, which will be his final appearance of the season after already tossing 32-plus innings. The Cats conclude this week’s homestand with the second of the two-game series against Duluth. First pitch is scheduled for 7:05 p.m. at Port Arthur Stadium.

Spanish caravan continues to roll into Lakehead U
May 2, 2021 2:15 PM
Comments