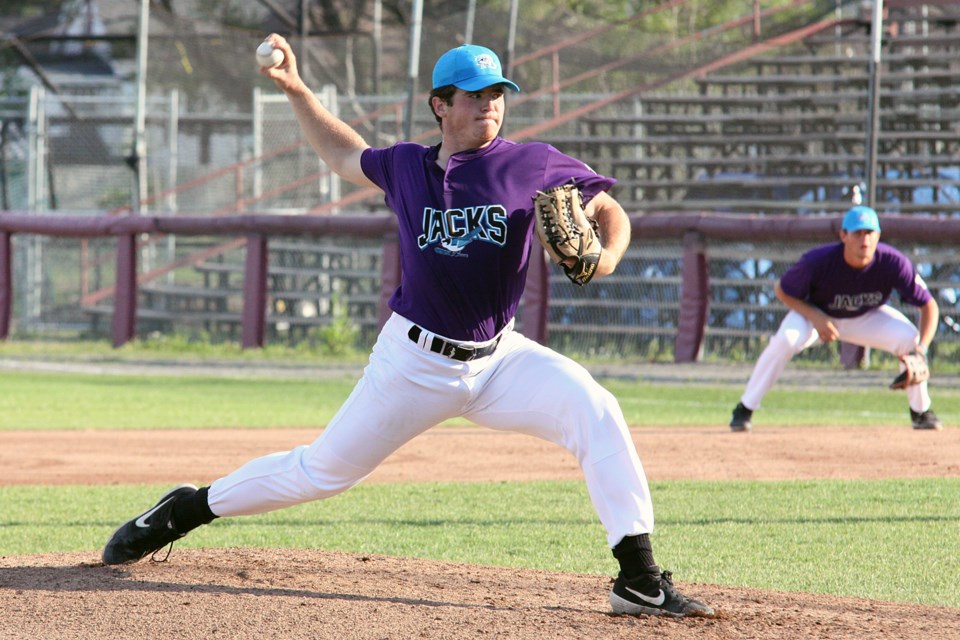 THUNDER BAY – Joe Moran has proven to be a diamond in the rough for the Thunder Bay Border Cats.

A junior at his hometown Anderson University, an unheralded NCAA Division III college in Indiana off the beaten path for players looking to launch a professional baseball career, Moran will be the lone Border Cats representative to suit up at Tuesday’s Northwoods League All-Star Game in Waterloo.

An underdog in a summer collegiate circuit surrounded by players more heavily recruited by household name schools higher on the radar of professional scouts, Moran has shined with a 3-1 record and sporting a stellar 2.13 earned run average.

“It’s good for me to come up here and I trust the hard work and preparation I put into it, then I just go out and do my thing. It’s really nice to see and reassuring for me. I knew I had good stuff and knew I could and to come out here and do it shows me and helps me build a better self-belief. I had a lot to prove coming out here.”

Border Cats manager Eric Vasquez, who had a connection to Moran’s collegiate coach, said he was told the right-hander would be a workhorse and wouldn’t lack for effort.

“Coming from a friend’s university, you just never know who you’re going to get. You just really don’t,” Vasquez said.

“There are so many different college players around and what he’s brought to this team; he’s the leader. (His teammates) look up to him, the way he goes about his business. He goes and works out every day, he comes out here and you see him do his early work. He’s stretching and he’s throwing. It’s just one of those things.”

Despite being signed as a pitcher, Moran started his Border Cats tenure with a bat in his hands. A part-time first baseman at Anderson, Moran saw a need in the lineup while the club waited for other players to arrive and volunteered to be the designated hitter for his first three games. Finally taking to the mound for the first time on May 31, he tossed two scoreless innings. Moran followed that debut with a pair of wins in his next two starts, allowing only one earned run over the combined 11 innings.

Moran kept rolling, coming a single out away in one turn from putting together quality starts in each of his next three outings before a rough outing at home against Duluth last week. Despite lacking a dominant strikeout ratio, Moran has gotten outs by primarily relying on a well-located fastball along with an off-speed change-up to induce weak contact.

“He throws strikes, he hits his spots,” said battery mate Alex Hernandez, who has the best view of Moran at work catching behind the plate. “His (velocity) is ridiculous. He’s got great (velocity). He can mix and match different pitches, different locations and he just knows how to pitch.”

Vasquez has frequently paired other pitchers to work with Moran between starts, hoping the hurler’s commitment to constant improvement will rub off on teammates.

“You see the confidence and he did it, but he works at it. He’s out here on his off days throwing. It’s not just something that’s inherently good for him,” Vasquez said. “He busts his butt and I enjoy watching him. I enjoy talking to him as a human. He’s a great human and those are the type of guys I wish my kids grow up to be and my kids can be around.”

The 21-year-old, who hopes to build on his momentum through the rest of the Northwoods League campaign and carry it into his collegiate season with an eventual eye on being picked up by a major league squad next season, takes pride in the opportunity to be a leader and said he’ll do whatever it takes to make his dream come true.

“I’m not really a big rah-rah guy. I’m not going to get in your face and yell and hype you up and tell you this is what you need to do and boss you around, but I try to lead by example,” Moran said. “I work as hard as I possibly can, so people can see me setting that good example.”

Johnston rink captures Major League of Curling crown
Jan 26, 2020 2:06 AM
Comments
We welcome your feedback and encourage you to share your thoughts on this story. We ask that you be respectful of others and their points of view, refrain from personal attacks and stay on topic. To learn about our commenting policies and how we moderate, please read our Community Guidelines.