The Lakehead Thunderwolves only managed one goal against the Manitoba Bisons seldom-used back-ups on Wednesday night. Their sputtering offense stood no chance against the reigning CIS goaltender of the year.
Dec 30, 2010 11:55 PM By: Leith Dunick 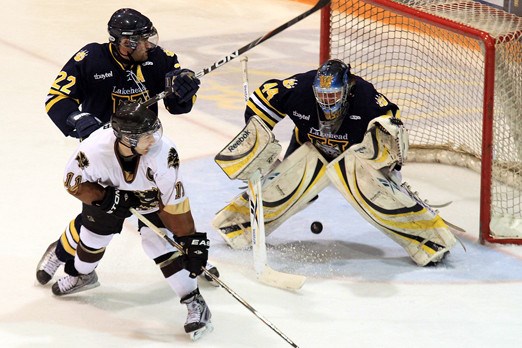 Their sputtering offense stood no chance against the reigning CIS goaltender of the year. Steve Christie was perfect between the pipes for the No. 9-ranked Bisons, turning away all 28 shots the Wolves directed his way, as Manitoba complete the Varsity Cup Challenge sweep with a 3-0 exhibition win at Fort William Gardens on Thursday night.

Greg Beller, who potted his third goal of the two-game series, netted the power play winner for the Bisons midway through the second, firing a shot through traffic that eluded LU goalie Kyle Moir,

Nolan Waker scored an insurance goal 2:12 into the third, one-timing a rebound off a Jordan Cyr shot on Moir’s doorstep. Teammate Riley Dudar put it away, firing a wrist shot from between the circles with about seven minutes to go in regulation.

Christie, who entered play with a 1.96 goals against average and a .924 save percentage, said the shutout was nice, but the win was nicer.

“It’s more important for me to feel good. It’s nice to get the goose egg, but in the end coming off the break you want to get back into things and feel comfortable in the net again.”

Of course, a little revenge is always nice.

The Bisons were thumped handily in back-to-back games at last year’s Varsity Challenge, falling 8-2 and 6-3. Christie remembers it well.

“A win like this is extra special,” he said. “I was in for one game (last year), and then I came in halfway through the other. Neither of us had a good outing that weekend. But I’ve always had success here, other than last year. But it’s so fun here you get amped up for the game.”

The Wolves best chances came in the first.

Ryan Magill and Adam Sergerie teamed up on a 2-on-1 four minutes into the contest, but Magill fired the shot wide. A minute later leading scorer Matt Caria was sent in alone by Sergerie, but he too fired wide.

“Those were huge saves,” said Bisons coach Mike Sirant. “If those go in, then all of a sudden it gives Thunder Bay a life and belief. It puts us behind right at the start.”

LU coach Joel Scherban said Christie was the difference, though his players didn’t exactly make it tough for the Manitoba netminder.

“He played phenomenal. You look at Manitoba and Canada West and Atlantic Canada, and every game they play all year is against a quality opponent, and you can tell by the way they played. And I think we get away with stuff in the OUA that it would be better if we couldn’t get away with, and we need to elevate our level of play so we’re competing with teams like that, when we do get into nationals, hopefully,” Scherban said.

The Wolves also had a 1:33 two-man advantage late in the second, but couldn’t convert.

Lakehead starts second-half play at home next weekend when the Windsor Lancers invade the Gardens for a pair on Friday and Saturday night.

Claw marks: The Wolves were without high-scoring forward Ryan McDonald for a second straight night. The Sault Ste. Marie native was at a family wedding ... During the first intermission the Thunder Bay Queens had a championship banner raised to the Gardens roof, in honour of their win at last spring’s Esso Cup, the national women’s midget hockey championship ... In the first game of the Varsity Cup Challenge, the Thunder Bay Major Midget Kings beat the Winnipeg Thrashers 5-0 ... It was the third time the Wolves were shut out this season. All three losses were by identical 3-0 scores. Windsor blanked them 3-0 on Oct. 16. Two weeks later it was York’s turn.