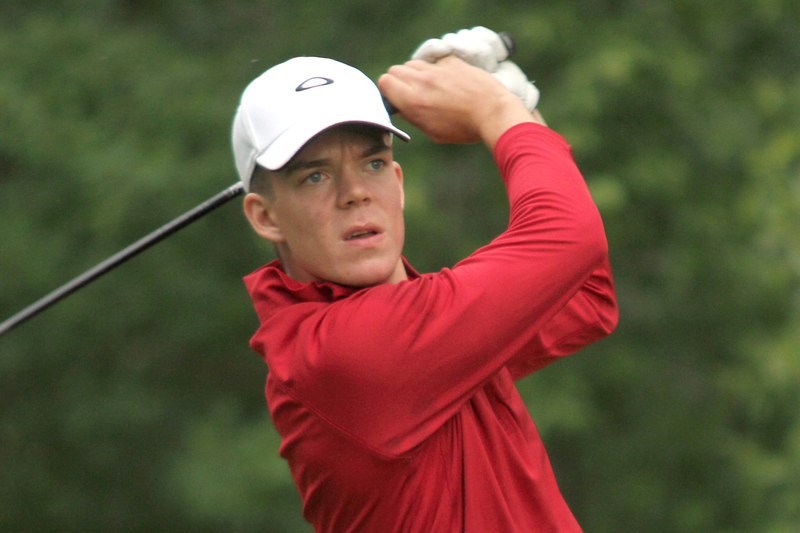 Evan DeGrazia bogeyed the second hole Sunday at Fort William Country Club, but was seven under from there to take the Keg District Open and the second of two local qualifying berths at next month's Staal Foundation Open.

Evan DeGrazia hopes the Staal Foundation Open is the first of many PGA Tour Canada events.

If he plays a fraction as well as he did in the wind and rain the swept through Fort William Country Club – not to mention a 45-minute lightning delay – he’s got as good a chance as any.

The 19-year-old DeGrazia, tied for the lead with Evan Littlefield and Walter Keating Jr. after a one-over 73 Saturday at Whitewater Golf Course, started slow, but once he got going put on a golfing clinic. DeGrazia double-bogeyed the second hole, then shot seven-under on his final 16 holes, including an eagle on No. 10, finishing with a five-under 67 round to all but lap the field.

“Two over after two holes is not where you want to be, but I parred the next hole, which really got it together and then had three (birdies) in a row which really helped.”

There wasn’t a pin he feared on Sunday, sticking his approach shots hole after hole, said playing partner Keating, a former Canadian Tour player who this past week finished fifth at the PGA of Canada National Club Pro Championship.

“He just ball-striked today,” Keating said. “That’s flat out what he did. He hit it inside three or four feet five times for birdie and he chipped on in for eagle. It’s real simple.”

Forced to seek cover facing a birdie putt from the fringe on No. 17 when the horn sounded, DeGrazia didn’t let the delay get into his head. Not that it mattered. By that point he’d amassed an eight-stroke lead over three golfers, including Keating, Robbie Untinen and Jeff Hunter, who had to settle for a three-way tie for second with five-over 149s.

DeGrazia, who is transferring to South Carolina’s Newberry College this fall, said he had one thing on his mind entering Sunday play.

“I wasn’t playing for the Keg District Open, I was playing for that one spot and I just knew what I had to do to get that spot. It worked out well today,” the aspiring pro said.

The Staal Foundation Open, which begins the week of July 14, is the culmination of the youngster’s lifelong dream.

“It means a lot to me, my family, my dad,” said DeGrazia, whose father was at his side caddying all weekend long.

“They just put in so many hours throughout the years and how much they sacrificed for me. I’m feeling good going in. I shot a nice round today, a momentum builder for the following two weeks. We’ll see where it takes me.”

“It’s great because it was a great score today. Sixty-seven, in the conditions, was unbelievable.”

Jamie Depiero secured the other local spot earlier this month in a one-day qualifier at Strathcona Golf Course.

First-time champion to be crowned at Strathcona Invitational
Aug 2, 2021 12:27 AM