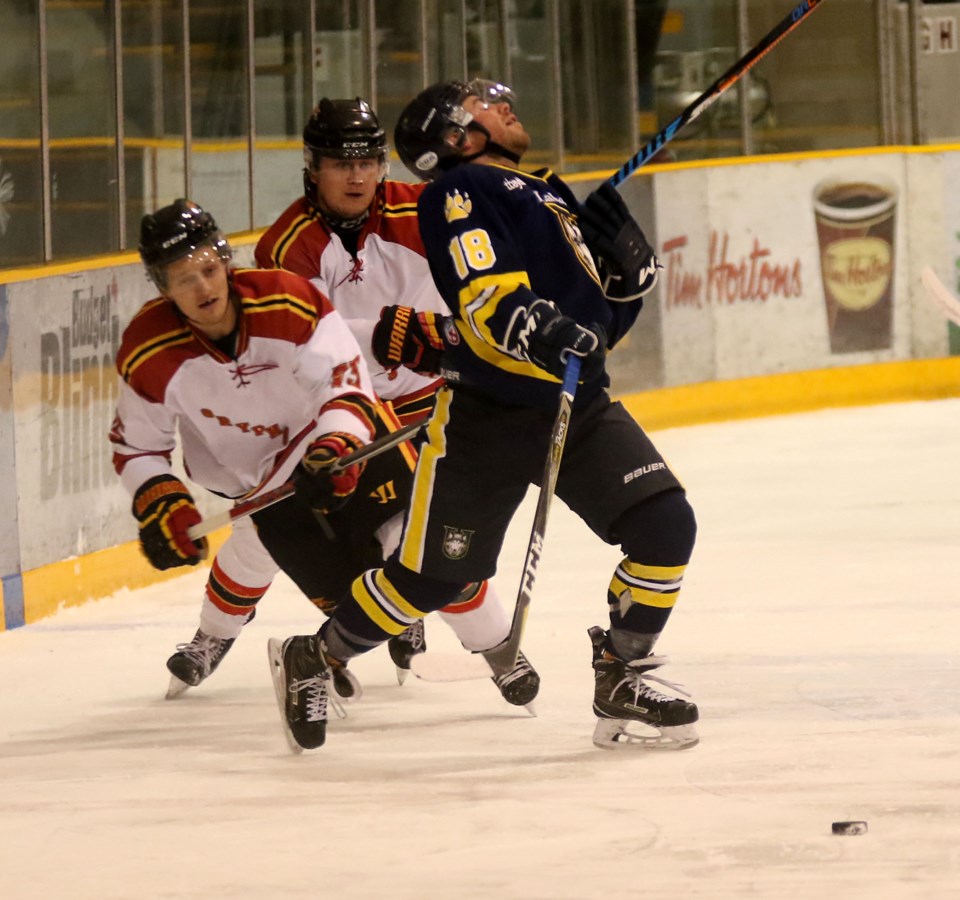 THUNDER BAY – Momentum only lasts until you lose it.

The Lakehead Thunderwolves, buoyed on Thursday night by Brennen Dubchak's last-minute, second-period goal that staked them to a 2-0 advantage over the Guelph Gryphons, took a couple of costly penalties in the third, surrendered the lead, then lost the non-conference tilt 3-2 in overtime.

Todd Winder, working the left side of a 2-on-1 during the 3-on-3 extra frame, rifled a wrist shot through Nic Renyard’s five-hole for the winner, which came 46 seconds into OT.

It’s a game the Wolves (6-8-1) let slip away, said forward Matt Alexander, whose first of the season in the opening period gave upset-minded Lakehead an early 1-0 advantage over the OUA West-leading Gryphons (11-4-1) in front of 1,836 at Fort William Gardens.

“They capitalized on their chances and we didn’t and when that happens, usually it goes the other way,” said Alexander, who missed a chunk of the opening half of the season.

The junior forward could have been the deciding factor himself in regulation, stymied on a pair of close encounters with Guelph goaltender Andrew Masters, who stopped 41 shots on the night to earn the win.

“I definitely could have had a hat trick today. We had a bunch of chances and I think a couple more guys could have had hat tricks tonight too,” Alexander said. “It’s kind of been the story of our first half. We just can’t seem to put the puck in the net and hopefully that changes here in the second half.”

It’s a tough loss, but it was a chance to shake off the Christmas rust before the regular season resumes next week.

“They kind of schooled us on the power play in the end. We had our power play chances too and had some really good chances that never went in. We had 43 shots. They’re a good team,” said LU coach Bill McDonald.

“They’re a good team and it was kind of the game I expected to see. There were lots of mistakes. A lot of our guys had chances and lost their hands. That happens when you’ve been out for over a month.”

The offensive struggles allowed the Gryphons to claw their way back into contention, helped by a lack of discipline by the Thunderwolves in the third.

Seldom-used defenceman Aaron Wesley-Chisel was sent off for tripping three minutes into the period and 47 seconds later Seth Swenson one-timed Manny Gialedakis’s pass from behind the net past Renyard to cut the LU lead to 2-1.

Marc Stevens potted the equalizer 3:20 later, this time with Daniel Del Paggio in the box, pouncing on a loose puck in front of Renyard and punching it home.

“If you give a team like that enough cracks they’re going to break it and they did,” McDonald said.

The Wolves and Gryphons will wrap up their two-game set on Friday night.