Gymnasts focused on power, precision and passion while performing at the provincial qualifier and the invitation competition.
Mar 6, 2010 3:45 PM By: Jeff Labine 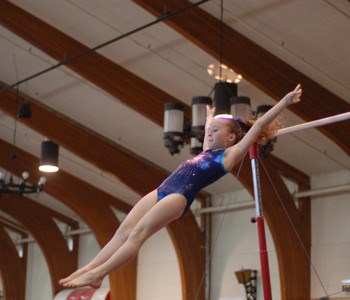 Emma Hay, 8, leaps off a bar at the Thunder Bay Gymnastics Association competition on Saturday. (By Jeff Labine, tbnewswatch.com)

Gymnasts focused on power, precision and passion while performing at the provincial qualifier and the invitation competition.

The Thunder Bay Gymnastics Association held both the provincial qualifier and the invitation competition at the Coliseum building on the CLE grounds on Saturday. The competitions were open to local athletes as well as athletes from Dryden, Kenora, Red Lake and Sioux Lookout.

Special awards were given to gymnasts demonstrating outstanding power, passion and precision.

The Grade 6 student from St. Bernard public school said she was nervous when she first started but loosened up a bit after she started to compete.

Piper said she like performing on the floor and vaulting the most. She said she enjoys vaulting since her tumbles have a lot of power to them.

Mckenna Cades, 12, performed in the level five category of the provincial qualifier and came in first overall.

"We’re here just to have fun, get scored and practice what we know," Mckenna said. "Gymnastics is lots of fun and it teaches you other skills like hand-eye coordination. We had awards for power, passion and precision, which are the areas we focus on when we practice."

Mckenna said passion is important because it shows flare and attitude when competing. Having passion while performing defines a gymnast from the rest of the athletes, she said.

Jacalyn Cop-Rasmussen, director for the Thunder Bay Gymnastics Association, said those that competed in the provincial qualifiers would go onto the Ontario cup held in Windsor on April 9.

"The provincial cup is a big deal for these athletes," Cop-Rasmussen said. "Some of them are training 16 hours a week and so they are putting in that time to go to the Ontario cup. They are competing against the elite gymnasts."