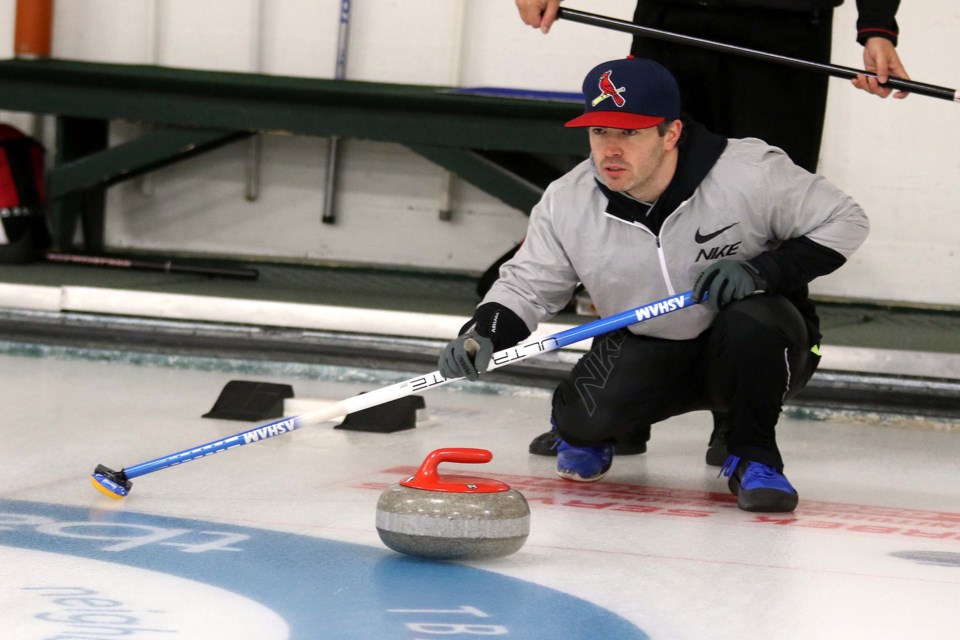 THUNDER BAY – In the past, Dylan Johnston has helped out as a spare in the Major League of Curling.

But this season was different.

Johnston, who plans to competre at next weekend's Northern Ontario provicial men's playdowns, skipped his own squad to an 11-2 record during regular-season play, then made easy work of the competition in the playoffs, culminating on Saturday with a 7-4 win over Ron Rosengren's team – skipped this weekend by spare Gary Malette.

Winning the title with his own team, rather than as fill-in, felt great, said Johnston, donning his traditional St. Louis Cardinals hat throughout the match, played at the Port Arthur Curling Club.

“It feels good. There was a little bit of pressure going in to win it as a skip, instead of just sparing,” Johnston said.

It helped to get off to a good start.

And that he and his foursome, which included Chris Brian, Oye Sem Won and Kurtis Boyd, did, opening with a pair in the first end and stealing another in the second.

But Malette roared back in the third with a hit-and-stick for three to tie the match 3-3, showing Johnston capturing the title wasn't going to come as easy as it might first have seemed.

Letting them back into the match wasn't part of the playbook, but they didn't let it rattle them for long.

“We gave up a big three-ender to them and they came back and tied it. But we just had to keep playing our game and hope for some misses by them and it happened,” Johnston said.

In the fourth, after Malette crashed his final stone into the guards in front of the house, Johnston was left with an easy draw for two, helping him retake control of the match.

Malette gave up a second steal of one in the fifth, when he was unable to execute a tricky final shot, attempting to bounce off his own guard and take out Johnston's shot stone.

Instead he crashed into the guard and the point belonged to his opponent, who jumped in front 6-3.

Johnston filled the rings with three rocks, ultimately forcing Malette to hit and stick for one point – and cross his fingers for a second.

Unfortunately, when they measured to confirm the second shot stone, the result was in Johnston's favour, so instead of closing the gap to one they remained two behind.

“The measurement, we were pretty sure it was us, so we tried to force them instead of the blank and it worked out good for us,” Johnston said.

Team Rosengren third Gary Manula said it might have been the difference in the championship.

“We got ourselves into a hole and we just tried to make a game of it. We were pretty happy when we came out with the three and got ourselves back into it, but they played so solid it didn't give us any chances to make. Any misses at all and we were in trouble,” Manula said.

With the hammer Team Johnson hit and stuck for one in the seventh, then ran their opponents out of rocks in the eighth to capture the ctrown.

Johnston earned his spot in the final with a 7-2 win over Gary Weiss earlier in the day in semifinal play, while Team Rosengren, which also included Ken Sundell and Dave Scholz, knocked off former two-time world curling champion Al Hackner 10-2 in the other semifinal.