Amid cheers and applause, the Thunder Bay Queens returned home Sunday carrying a national championship trophy that proved they can play against the best.
0
Apr 26, 2010 10:34 AM By: TbNewsWatch.com Staff 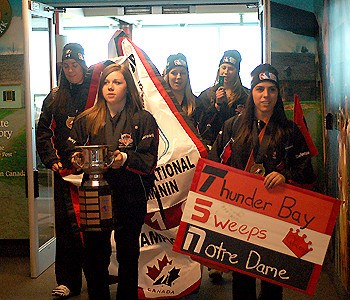 Down 3-1, the Queens rallied and scored three unanswered goals to claim the Esso Cup. The Queens’ Kaitlyn Tougas scored two goals to lead her team to victory. That performance helped her take home the tournament MVP title.

"We were really down on our selves but it was only the second period," Tougas said. "It was a long game to go so we stepped it back up and went from there."

Tougas said the tournament would be something she would remember for the rest of her life. She said it was an honour to receive the award.

Tougas said she considered her team-mates sisters and wanted to continue playing hockey for as long as she could.

"I'd say women's hockey is more exciting," she said. "The skills girls have these days are awesome. People don't expect us to play hockey that's why it’s more exciting."

Jana Henry said there were plenty of tears and singing inside the locker room after the game. The Queens played against the Hounds in the round robin prior to the championships. That experience would prove vital as the Hounds scored the first goal.

The Queens came back and Jena said they didn't panic and remembered how to beat them back in the round robin.

"It is unbelievable," Henry said. "Going from winning the provincials just a week ago to winning the nations...it's a dream come true."

"I told the girls they are running out of gas so it is going to be that much sweeter when we come back to beat them," Lavoie said. "I'm very proud of this team. A lot of different characters all pulled together. They worked hard all year long."

Lavoie said women's hockey needed the championship badly. He said the trophy shows the girls can play with anybody.