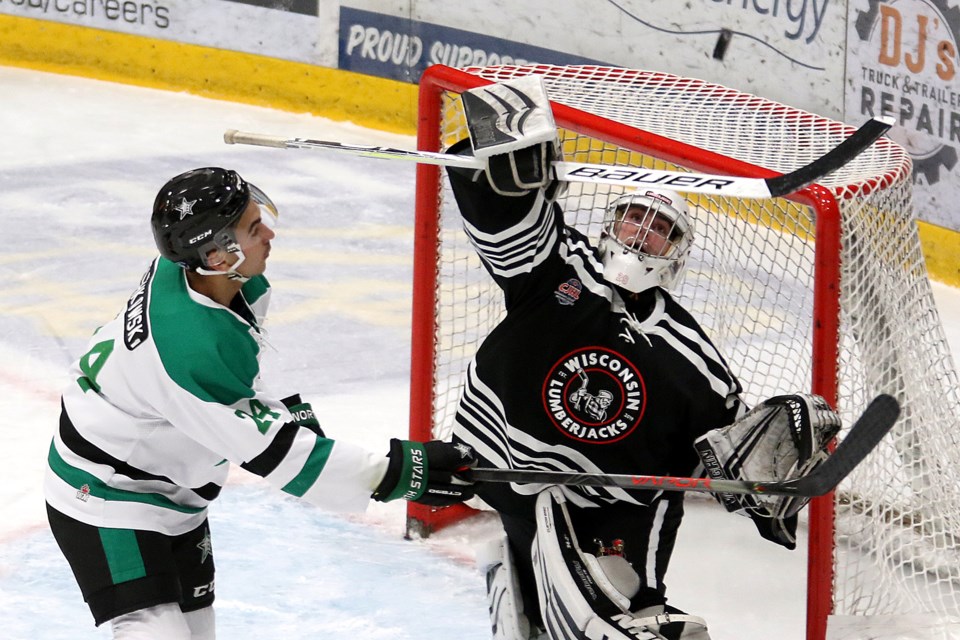 THUNDER BAY – Jacob Anttonen has only been held off the score sheet four times in 15 games this season.

He’s got points in eight of his last nine appearances and added four more to his total on Wednesday night, scoring twice and adding a pair of assists, which, combined with Jordan Smith’s 43-save effort, led the Thunder Bay North Stars to a convincing 8-0 win over the visiting expansion Wisconsin Lumberjacks (5-11-1) at Fort William Gardens.

For Anttonen, it was his third two-goal game of the season and his second four-point outing, the first coming on Oct. 11 against Red Lake.

It also came at an opportune time, with first-line forward Joel Willan serving a two-game suspension and team captain Logan Mihalcin, the anchor on the North Stars blue-line, starting a three-game ban for an incident last Saturday against the Fort Frances Lakers.

“We had two of our better players out and we had to step up. All four lines stepped up. We all played our game and that’s how it went,” said Anttonen, who took over top spot in the Superior International Junior Hockey League point parade, his 23-point total two better than teammate Jacob Brown’s.

It says a lot about the team, who improved to 8-0-0 on home ice and increased their lead atop the SIJHL standings to eight points over the Red Lake Miners.

“Willan is one of our big helpers so I thought I had to step up a little bit,” Anttonen said.

Thunder Bay coach Rob DeGagne said that’s just the type of play he expects from his team – one for all and all for one.

It would have been easy to make excuses, but instead the Stars buckled down at both ends of the ice.

“I was very happy with the way they came out today and played,” DeGagne said. “We never missed a beat. We had other guys, like Michael Vecchio and Anttonen who picked up the pace. It’s almost like that football mentality – next man up. And they played that way.”

DeGagne said the 19-year-old Anttonen can be a streaky player at times, but when he’s hot, he’s tough to stop.

“He’s having a good year. He kind of reminds me of a Doug Gilmour kind of guy. He’s got a small body, but he’s got a big game. He’s not afraid and he uses his feet and his other two wingers,” DeGagne said.

Smith, who leads the league with a 2.38 goals against average and .931 save percentage, said it was great to see so many pucks slip past the opposing goaltenders.

It made his night that much easier, taking much of the pressure off over the latter half of the game.

“The boys were going today, for sure, and without them we couldn’t have got the W,” Smith said, taking none of the credit for the win.

“You just have to take it one shot at a time and don’t worry about the outcome, just the next shot.”

Evan Nicholas added a pair for Thunder Bay, who got singles from Brown, Nikolas Campbell, Cody Bruchkowski and Vecchio, who slid the puck between the legs of Wisconsin defenceman Braden Laporte, worked around him and rifled it past Lumberjacks goaltender Nathan Mueller.

Mueller, coming off a shutout in his previous start, was yanked after the Stars seventh goal by back-up Matt Fitzgerald with five minutes to go in the third.

Nicholas finished with two goals and a helper on the night.

Our picks for the Top 10 Northwoods League players of all-time
May 24, 2020 9:03 AM
Comments
We welcome your feedback and encourage you to share your thoughts. We ask that you be respectful of others and their points of view, refrain from personal attacks and stay on topic. To learn about our commenting policies and how we moderate, please read our Community Guidelines.